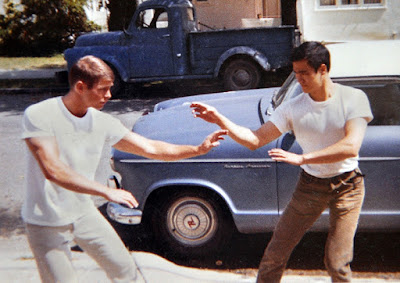 Xingyi Straight Sword - Mike Patterson
Posted by Owen_Schilling at 1:58 AM No comments:

Bagua Eight Palm Variations Kua 2 and selected applications - Mike Patterson
"This is the second in a series regarding Bagua's eight palm variations form (Ba Chang Bien Hsing) and sample applications. Complete instructions on both the form and complete applications can be found on our instructional DVD series on this set at hsing-i.com here... http://www.hsing-i.com/bagua-dvds/"
Posted by Owen_Schilling at 3:36 AM 3 comments:

Xingyi Staff partial and selected applications - Mike Patterson
Posted by Owen_Schilling at 2:16 AM No comments:

Sammo Hung - The Legend Tribute
Posted by Owen_Schilling at 6:04 AM No comments:

Treasures from the Forbidden City - The Emperor's Private Paradise

Treasures from the Forbidden City - The Emperor's Private Paradise
Posted by Owen_Schilling at 6:36 AM No comments:

Email ThisBlogThis!Share to TwitterShare to FacebookShare to Pinterest
Labels: Treasures from the Forbidden City - The Emperor's Private Paradise 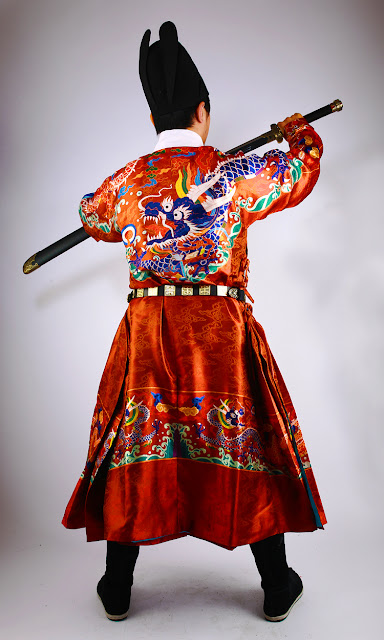 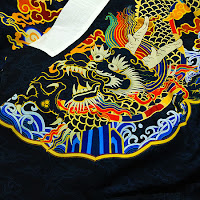 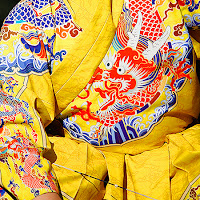 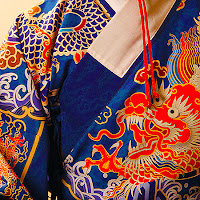 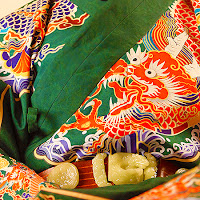 The Jinyiwei 锦衣卫, (literally "brocade clad guards)- were elite bodyguards and secret police that directly served the Ming Emperors. Functionally they were reminiscent of the Roman Praetorian Guards, and the Shinsengumi at the twilight of Japan's Tokugawa Shogunate.

The Jinyiwei was founded by the Hongwu Emperor in 1368 to serve as his personal bodyguards and it developed into a military organisation the following year. They were authorized to overrule judicial proceedings in prosecutions, with full autonomy granted in arresting, interrogating and punishing anyone, including nobles and the emperor's relatives~ in time they would become synonymous with imperial assassins.

The Jinyiwei were also tasked with collecting military intelligence on the enemy and participated in battle planning stages. A Jinyiwei is distinguished by his distinctive dragon embroidered uniform, an ivory tablet (非象牙腰牌) worn on his torso, and a special blade (繡春刀.) 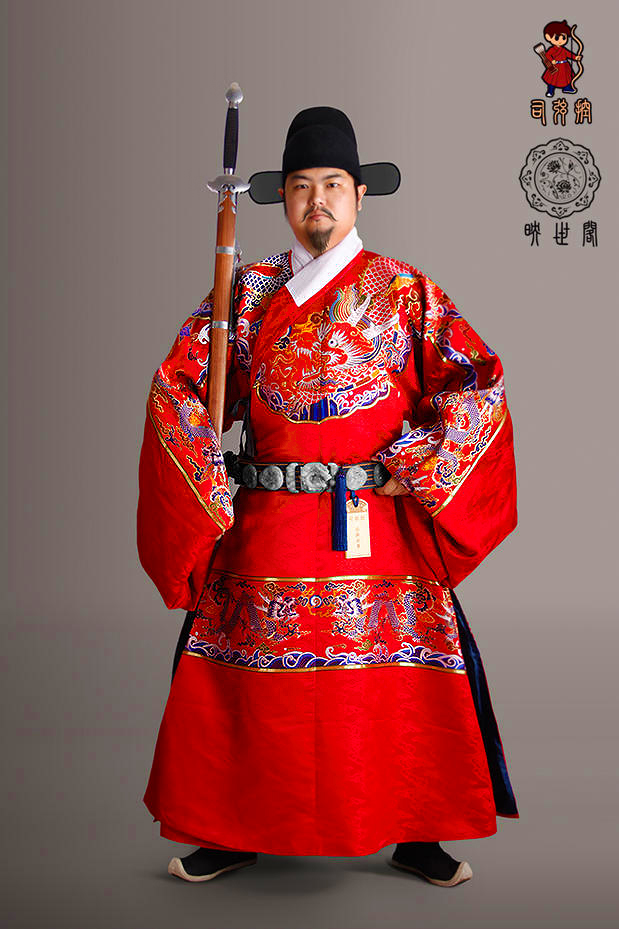 A military official in court robes. Most of the guard captains would have worn similar attires~
including the hat of an mandarin official designating his rank.

The Jinyiwei was created as a direct result of the centralized nature of Ming monarchy. The Hongwu Emperor, the progenitor of the dynasty had always felt that what had led to previous Chinese dynasty's decline was unchecked infighting, factionalism, and rampant corruption that fundamentally weakened the court from within. In every such cycle, the poor's plight were blocked from the supreme rulers of the land, the essential truths from the provinces were tampered with, the powerful factions would monopolize power while leaving the empire blind and misguided, ultimately culminating in the destruction of the empire. To prevent this, he must be assured that he can always pierce the veil of misinformation. 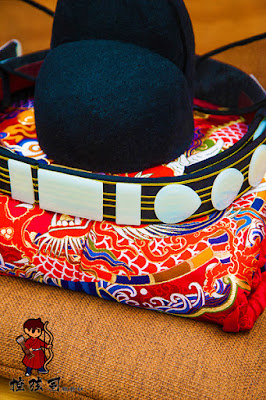 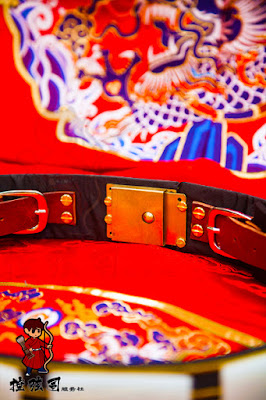 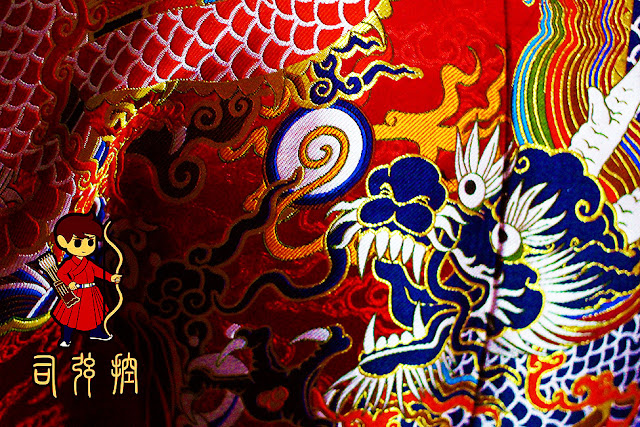 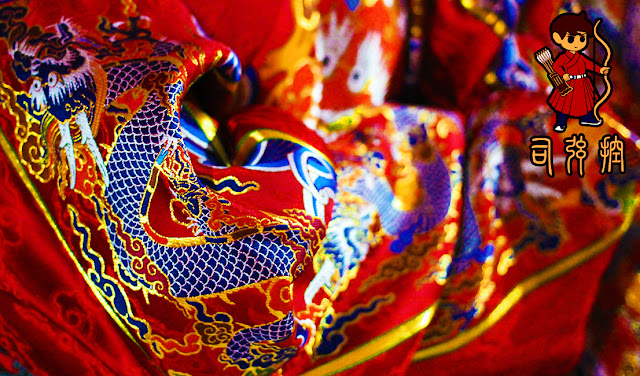 Details of the brocade robes worn by the guards~ Note that they were one of
the few group of people privileged enough to don golden robes (usually reserved for the
emperor himself and his family members) ~ and to have the sacred dragon emblems sown on
their uniforms. They had originally started as honor guards, but slowly became a
secret police solely loyal to the emperor. At the end of the dynasty they were virtually
a vast intelligence bureau of their own.

The Hongwu emperor had been born a peasant named Zhu YuanZhang and had lost both of his parents to famine in his infancy. When he was a child, China was still ruled by the mongol overlords~ who had by this point became both inept and tyrannical, often ignoring the famines in southern China that led to millions of deaths. In the emperor's youth he had lived a shockingly destitute existence, from a penniless beggar, to an urchin hooligan, until he ended up at the head of one of the many rebel armies sick and tired of the Mongol yoke. Thus when he finally ascended to the throne, he was fully aware of the cyclical plight of the lowborn and the threat of a bickering, lying court filled with privilidged officials' intrigue. 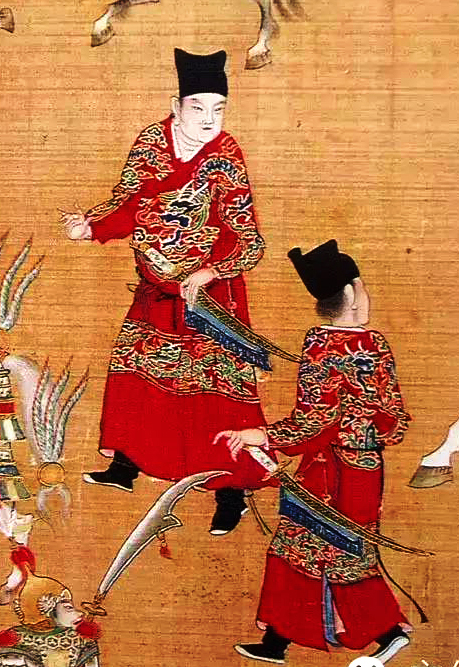 To him: if he does not lead at the front, forcing his dictatorial edits across the empire, he'd be letting the imperial power delegate itself out of existence, (as it had been for countless "soft" dynasties before him.) To do something that lasts, forge a dynasty that lasts, and have works for the peasants done "right," with constant supervision, he would need enforcers and informers.

He needed a force directly loyal to him that could step in and exert imperial power~ whenever there are too many factions deadlocking policies or whenever there are too many contradictory reports from untrustworthy frontiers. The Jinyiwei would act and serve as his private eyes and ears and would pierce the cocoons of lies around the court to provide direct reports "for His Majesty's eyes only." 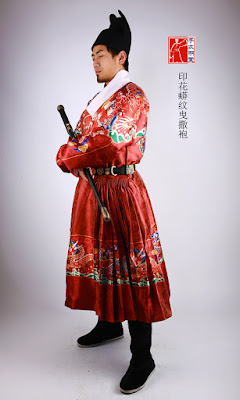 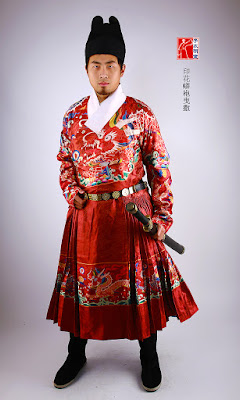 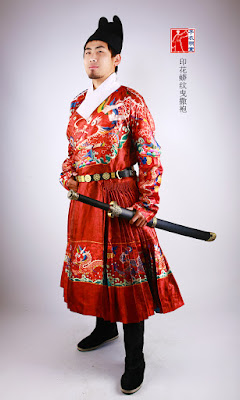 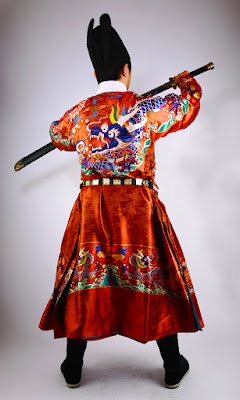 Multiple views of the Jinyiwei uniform, the dragon robe, the sword and the cap

The earliest days of the Jinyiwei was just that, a loyal cohort of bodyguards~ similar to the Praetorian guards or the Ottoman Janisarries that fought regularly in the field in conjuncture with campaigns. When Zhu YuanZhang was still consolidating his power in the massive rebellion against the mongol emperors, the Jinyiwei served as his aides and defended him on his campaigns. 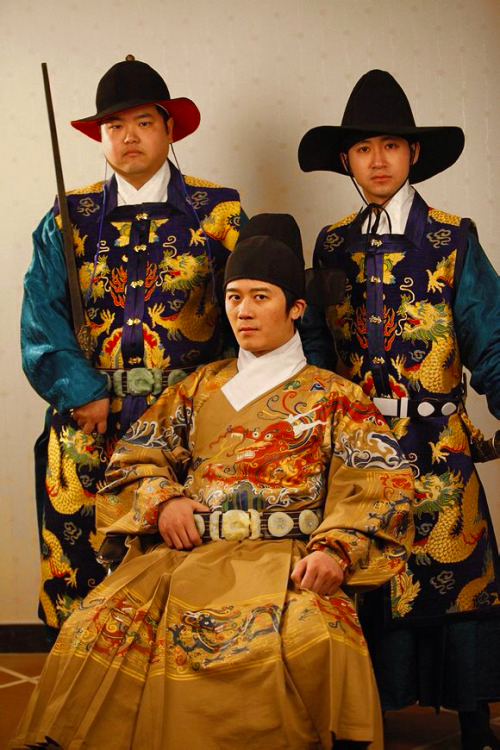 But over time, their roles and their numbers changed accordingly to the politics of the dynasty. After Zhu founded the Ming dynasty and became the Hongwu Emperor, he doubted his general's loyalties and was constantly on guard against possible rebellions and assassinations. One of the early duties of the Jinyiwei was to help the emperor spy on his ministers. The Hongwu Emperor increased the Jinyiwei's duties later, allowing them to inspect his officials at work in the capital city, before formally establishing the organisation in 1382, with about 500 members. Their numbers increased to around 14,000 in three years. 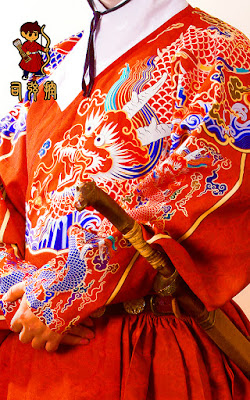 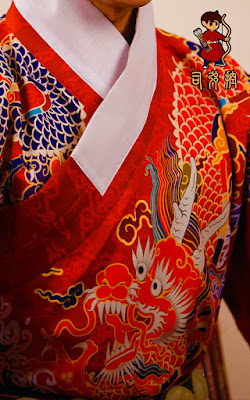 By now it had become amply clear they have became a corp of assassins and secret police that actively hunted down disloyal generals and suspected ministers in broad daylight. Their garrisons and barracks were soon expanded with prison cells and interrogation rooms. In time, their operation was given free reign to prosecute any officials on their own initiative within minimal imperial oversight.

Over these years, they would be feared throughout the empire: for the modern reader~ their singular zeal to their master, their prosecution of all their master's enemies would conjure up images of the Tsar Ivan the Terrible's Oprichniks~ all dreaded bloodhounds sniffing after hidden foes. 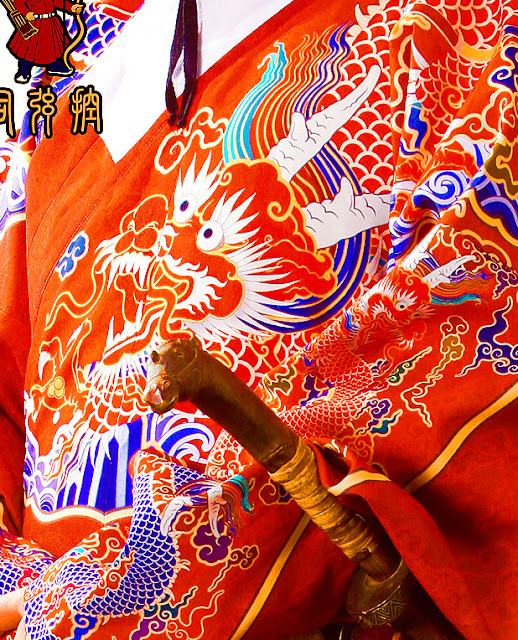 However, in 1393, after presiding two decades over their service, the Hongwu Emperor suddenly reduced the Jinyiwei's duties after they allegedly abused their authority during the investigation of a rebellion plot by Lan Yu, in which nearly 40,000 people were implicated and summarily executed. From then on, the guard corp languished under close imperial supervision. For the remainder of the Hongwu Emperor's reign they acted as little more than glorified policemen.

Despite this reversal, in the chaotic decades to come, the Jinyiwei would rise again to new savage heights. 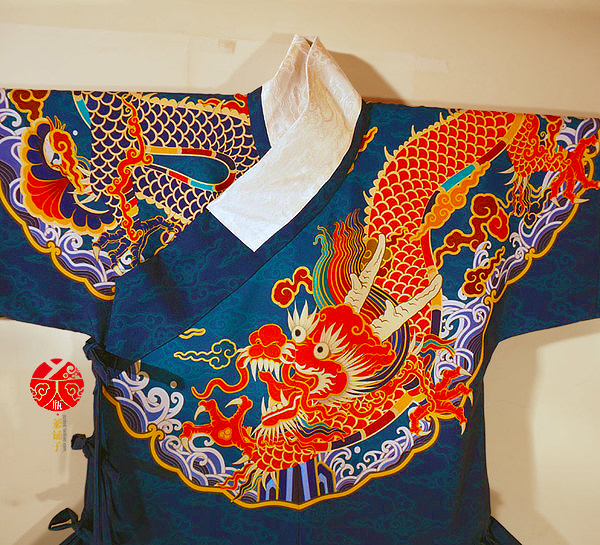 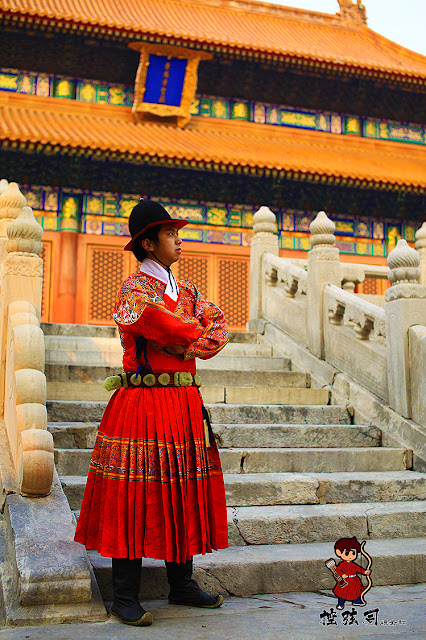 Leap attack and draw slash with 繡春刀, there are a numbers of disagreements among
historians as to the exappearance of the blade, except the fact that it is curved. Some
versions proposed a reminiscent of the curved sabers shown above in the Ming painting
while others point to the fact that the Ming records have described them with a
long handle~ so long that it was described as a pole~ 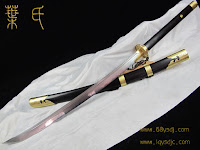 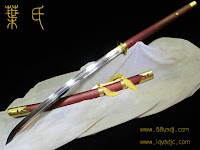 Two possible versions of the Jinyiwei saber, one possesses a longer handle. 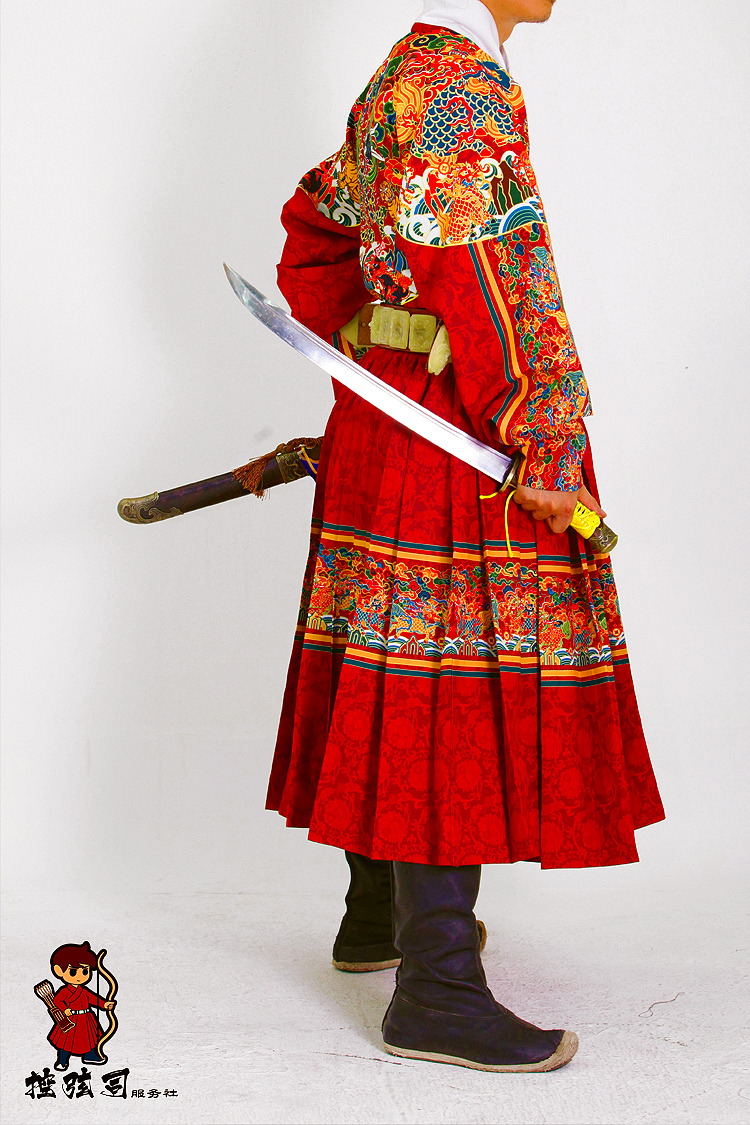 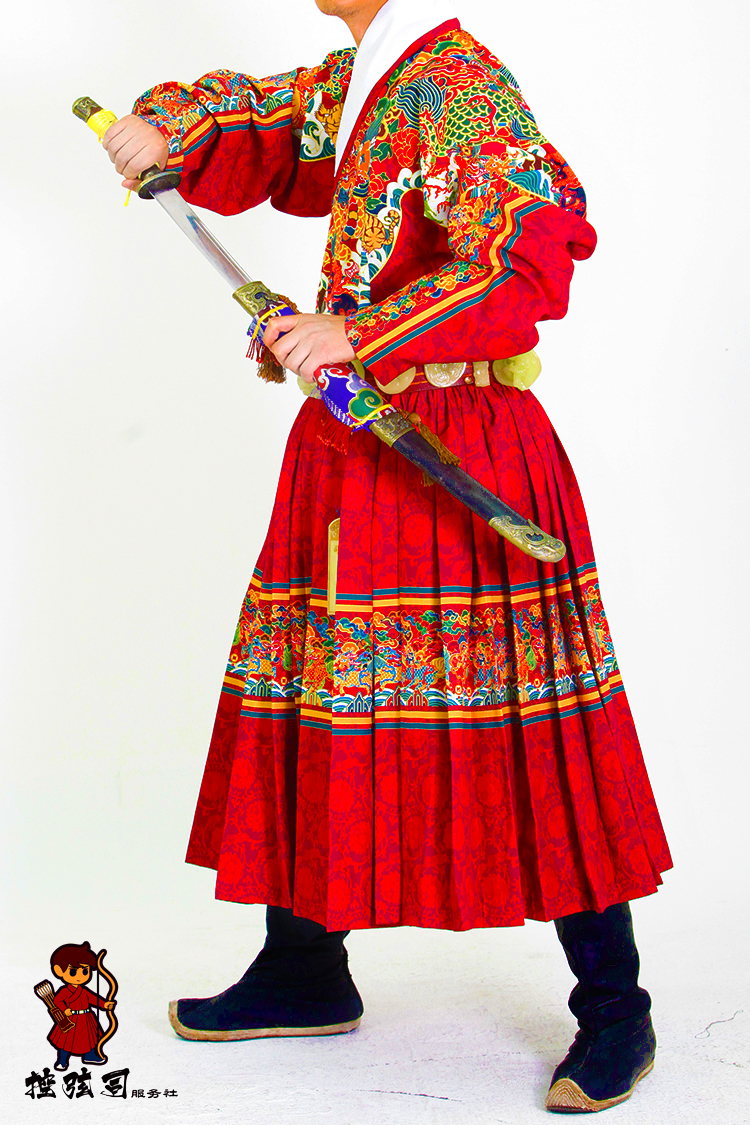 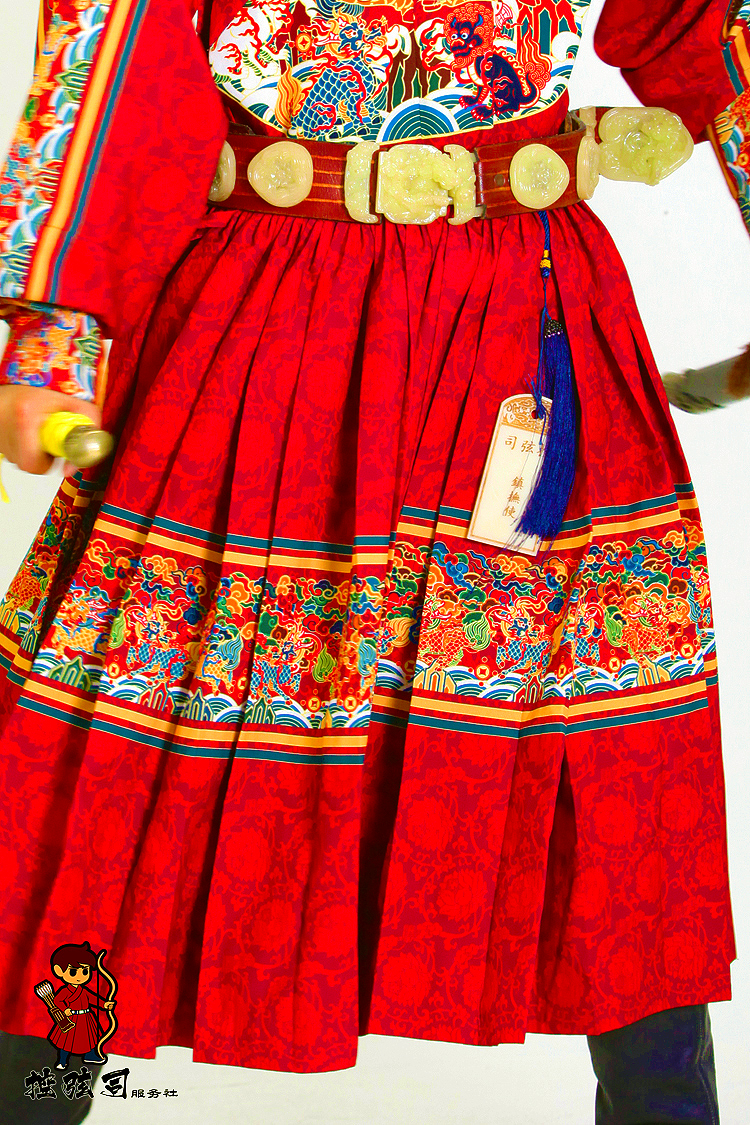 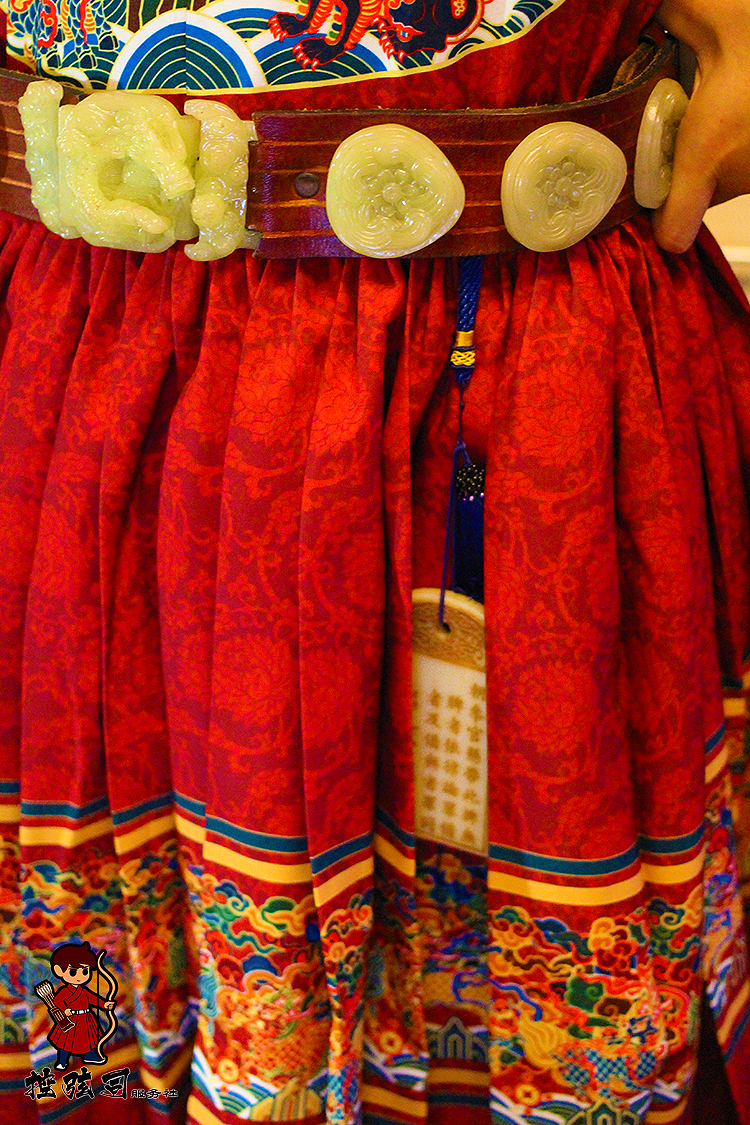 To be continued in Part 2.
Posted by Owen_Schilling at 5:34 AM No comments:

Published on Jun 7, 2016
Jiu-Jitsu has reached a critical point in it's evolution. On one hand, it is one of the fastest growing sports on the planet, on the other hand, it is at risk of losing its identity and suffering the same fate that has negatively affected nearly all other martial arts. What made made jiu-jitsu famous in the 80s and 90s was its unprecedented effectiveness in real fights, yet today, most jiu-jitsu academies do not teach the elements that make the art applicable in a real fight.

In this groundbreaking gathering, Rickson, Pedro, Ryron and Rener sit down to discuss the current state of jiu-jitsu and the critical steps that must be taken to preserve its original identity as a complete system of self-defense. Acknowledging that the formative years are most critical for any jiu-jitsu student, Rickson discusses his vision for the "perfect blue belt" and the critical roll of a structured curriculum in preserving this path.

To fully align themselves with the Jiu-Jitsu Global Federation, and Rickson's vision for the perfect blue belt, Ryron and Rener have made three significant changes to the Gracie Academy belt system:

3) No More "Online Blue Belts"
The Gracie Combatives belt is the only Gracie Jiu-jitsu belt that can be earned through the Gracie University video evaluation process. The fact that the course is comprised of set number of techniques (approximately 75), which are exclusively designed for an non jiu-jitsu street aggressor, means that an experienced instructor can effectively verify a student’s proficiency visually, in person or via video upload. All other belts, including blue belt, can only be earned via hands-on live sparring evaluation at an authorized Certified Training Center.

For more information on the Jiu-Jitsu Global Federation visit http://www.JJGF.com

Posted by Owen_Schilling at 1:53 AM No comments:

Posted by Owen_Schilling at 5:35 AM No comments:

Xingyi Spear
Posted by Owen_Schilling at 4:05 AM No comments: 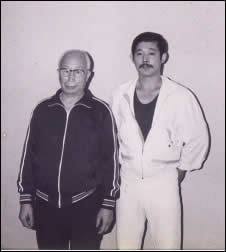 Gao Bagua Zhang - Subtle Skills
Posted by Owen_Schilling at 4:43 AM No comments: 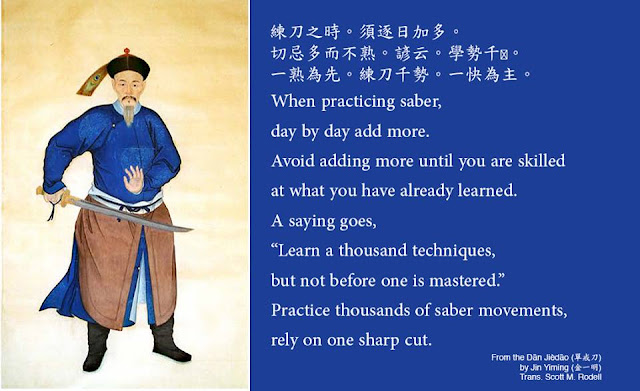 *a more literal translation for shú, translated as mastered above would be fully matured.

TRANSLATED AND POSTED BY SCOTT RODELL OF THE GREAT RIVER TAOIST CENTER.
Posted by Owen_Schilling at 5:24 AM No comments: