"Laoshan Mountains have a special status in China - well known for a story about a young taoist apprentice who seeked advice and wanted to learn the art of walking through walls, a story recorded by Pu Songling in his famous '"Strange Stories from a Chinese Studio". The master in the story was a taoist in Laoshan mountains, and the book itself was written there as well. Master Kuang Changxiu (1905-1993) was such master - a legend in the 1980s already, not only because of his skills in the Taoist art of internal alchemy but most of all in martial arts.

Born in 1905, he studied many Shaolin related local Shandong styles since childhood. At the age of 26 he became a taoist monk of the Jinshan (Golden Mountain) branch of the Complete Reality School. Since then he studied taoist meditation methods, medicine and martial arts from Kuang Zhenjue, his uncle, a taoist master and a disciple of Li Shiqing, a teacher of Wudang system. He referred to the martial arts system as Laoshan school of Wudang Boxing; it focused on kicking techniques which Master Kuang excelled at and hence was nicknamed nicknamed "Kuang the Flying Legs". His internal skills were also legendary - he could spend a week without food and sleep, in the state of deep meditation. Master Kuang was also a famous doctor, and worked as a physician when forced to becoming a layman during the Cultural Revolution. He wrote many books - on medicine, martial arts, Qigong/meditation - as well as novels and stories. I was lucky to meet Master Kuang in July 1991, stay overnight in Laoshan's Taiqing Palace, and watch the impressive demonstrations of martial arts. The system seemed very authentic and the skills very impressive; it was not a random collection of routines as is the case of Wudang, but a well organized system. I wonder who carries the tradition now, apparently Master Kuang taught many disciples.

The video is a part from the 1984 BBC documentary series "The Heart of The Dragon" called "Believing", one of the best productions showing real China in early 1980s, second only to earlier Antonioni's work." - Jarek Szymanski
Posted by Owen_Schilling at 4:10 AM No comments:

"Wang Zi-Ping (1881--1973) was a Chinese-Muslim practitioner of Chinese Martial Arts and traditional medicine from Changzhou, Cangxian county, Mengcun, Hebei Province.He served as the leader of the Shaolin Kung Fu division of the Martial Arts Institute in 1928 and was also the vice chairman of the Chinese Wushu Association. Wang was known for his mastery of Cha quan, Hua quan, Pao Chuan, Bajiquan, and Tai Chi Chuan. Wang developed "Quan Shr Er Shr Fa" (Twenty Fist Method) as well as "Ching Long Jian" (Green Dragon Sword)."
Posted by Owen_Schilling at 2:35 AM No comments:

Che style Xingyi Quan 车派形意拳
Posted by Owen_Schilling at 4:09 AM No comments: 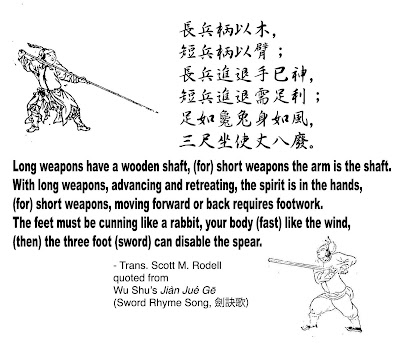 
Long weapons have a wooden shaft,
(for) short weapons the arm is the shaft.
With long weapons, advancing and retreating,
the spirit is in the hands,
(for) short weapons, moving forward or back requires footwork.
The feet must be cunning like a rabbit, your body (fast) like the wind,
(then) the three foot (sword) can disable the spear.

"Today's guest is Tim Cartmell who is a well-known pioneer within the Chinese martial arts most notably within the styles of Xingyi Quan, Bagua Zhang and Taiji Quan. He started with Kung Fu San Soo at a young age and moved to Taiwan at the age of 23 to pursue further studies in the Chinese martial arts and he studied with people like Xu Hongji and Luo Dexiu. He also traveled to mainland China to study these arts and spent time with Sun Jianyun, Liang Kequan, Mao Mingchun and others. During his time in Taiwan he competed numerous times in Sanshou full contact matches and attained numerous first places.
Tim returned to the USA in 1994 and soon after he started studying Brazilian Jiu Jitsu and achieved a black belt in the art. He has authored numerous books on the Chinese martial arts including translations of essential books on the arts." Tim Cartmell's Website: http://www.shenwu.com/"
Posted by Owen_Schilling at 5:26 AM No comments:

Rediscovering the Dandao: The Hidden Saber and Flying Knife

Rediscovering the Dandao: The Hidden Saber and Flying Knife
Posted by Owen_Schilling at 4:37 AM No comments:

Chinese Spear - 大槍實打錄像 - Daqiang Sparring
Posted by Owen_Schilling at 2:14 AM No comments:

Chinese Weapons 5 Elements Xingyi Staff & Spear
Posted by Owen_Schilling at 6:08 AM No comments:

Rare footage of early Dai Family Xinyiquan from Qi County, the cradle and until now the center of the style. The video features two famous disciples of Dai Kui: Ma Erniu (1906-?) and Wang Yinghai (1926-2012), as well as Gao Xiquan (1948-2017), son of Gao Shengzhen (another disciple of Dai Kui). Apart from the common parts of the system - Five Elements Fists and Ten (Animal) Shapes - less known methods are also presented, including the famous Three Fists, Seven Canons and Five Shoulder (Strikes), as well as a few very rare routines.
Perhaps the most interesting aspect of the demonstrations are differences in the signature movement of the system - the Body Method. The core method of Dai style is the Squatting Monkey exercise, which trains Contracting and Expanding (Shu-Zhan) of the body. While Gao Xiquan presents very standard - clear and obvious - Body Method which most of the practitioners nowadays display, Ma Erniu's body shows hardly any Contracting and Expanding. Sun Yemin, Song style Xinyiquan practitioner and a researcher of the history of Xinyi/Xingyi, who spent many years in Shanxi in the 80s, speculated that Dai Kui had probably changed the training methods of the family system after working as the martial arts instructor for Yan Xishan's army in Inner Mongolia. The main change was done to the Squatting Monkey exercise - making the range of the movement bigger. This could also explain why Contracting/Expanding is not very pronounced in Xingyiquan of Li Luoneng.
While this is only speculation, there is general agreement that Ma Erniu's method is very valid - and Ma was very respected in Qi County. On another note: Ma Erniu was famous for his hard power - while the general principle in Dai Family practice is to release power (use hard power, so-called "fast power"), he could release power with each movement. This was apparently linked to the fact that he began his studies of Dai style Xinyiquan very early, as a boy, and never married. Please note the footwork of Wang Yinghai - this was his signature skill. Wang was famous for his footwork, Ma Erniu - hard power, Wang Buchang - for shoulder strikes. According to oral stories told in Qi County, Dai Kui passed the family system not to just one disciple, but instead taught one skill to each of them.

More information about Dai Family Xinyiquan: Dai Family Xinyiquan - The Origins and Development: http://www.chinafrominside.com/ma/xyx... Dai Family Xinyiquan - Technical Characteristics: http://www.chinafrominside.com/ma/xyx... Please note that the explanation on the soundtrack not always point at the movements that are performed at the moment, hence I provided the above details for easier navigation. For more information about traditional martial arts of China please visit: www.ChinaFromInside.com Source：https://tv.sohu.com/v/cGwvNTQ4MzM1Mi8...
Posted by Owen_Schilling at 3:43 AM No comments:


"Perhaps the earliest documentary released in the PRC promoting Chen style Taijiquan - "A Journey to the Hometown of Martial Arts". Shot in 1979 by Henan TV Station, a few months after Deng Xiaoping had written the famous calligraphy "Taijiquan is good!" for the delegation of Japanese parliament (Nov 1978), it tells the stories of Chen Wangting creating Taijquan, Chen Zhaopi leitai fights and Chen Fake making the family style famous in Beijing.

Apart from Chen stylists such as Chen Xiaowang, Chen Zhenglei, Zhu Tiancai, Wang Xi'an, Chen Lanru, Chen Suying, Chen Chun'ai, experts of other branches are also shown in short demos: Lu Gaoming (Yang style), Ji Liangcheng (Wu Yuxiang), Li Bingci (Wu Quanyou), Sun Jianyun (Sun). And you just can't forget the lovely makeup of Chen Xiaowang playing the role of Chen Zhaopi, his main Taijiquan teacher... Subtitles have been added to the video - which was a very frustrating process - not only the soundtrack is not synchronized with the video, but also because it is not complete. Whenever it was possible the subtitles are synchronized with the voice over, but in some parts I decided to add them where they should actually be - so that the viewer can see the name of the performer when s/he actually appears on the video. I also added some additional information [in the square brackets].

There are some obvious errors in the original narration - early Ming dynasty began 600 years ago, not 300. Chen Lanru (the older lady with halberd) was second in Kaifeng leitai, not first (she lost to her cousin). Taking into consideration that the movie was a pioneering attempt made only three years after the Cultural Revolution, and two years before the groundbreaking "Shaolin Temple" was shot - this time in cooperation with the experienced Hongkong filmmakers - it is still interesting to watch. I apologize for the quality, but this is the only version I was able to find on the internet. I will gladly replace it with a better one, when I find one." by Jarek_Szymanski

Source: https://video.tudou.com/v/XMjE4MjkwNT...
Posted by Owen_Schilling at 4:43 AM No comments: 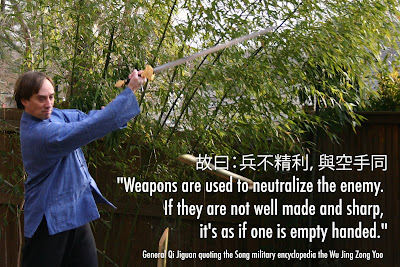 "Weapons are used to neutralize the enemy. If they are not well made and sharp, it's as if one is empty handed." General Qi Jiguan quoting the Song military encyclopedia the Wu Jing Zong Yao — with Scott M. Rodell.
Posted by Owen_Schilling at 5:33 AM No comments:

Posted by Owen_Schilling at 4:33 AM No comments:


"Sanda 散打 is a Chinese combat sport that has been around since 1979. We're using the term Sanda to refer to the modern iteration of the sport. A similar term Sanshou 散手 is often used interchangeably with Sanda, but Sanshou is usually more broad in its application and can refer to more than just the combat sport of Chinese kickboxing, so we will use Sanda here. In this interview translation and analysis, we have one of the first Sanda fighters and the first Sanda National Team head coach talk about the founding of Sanda and some of its intricacies and initial challenges. This interview is mindblowing because it sheds some light on the influences of Sanda. We have one of the first Sanda fighters talking so candidly. The guy's name according to the video is Qian Ren Biao. "

THE RESPONSE FROM DAVID ROSS

"A history of kung fu fighting! NSW. The good, the bad and the ugly. Those who could fight, those who didn't fight, those who THOUGHT they could fight. 1954 Macau Chan Hak Fu vs Wu Kung Yi, Kung Fu vs Muay Thai matches 1921 to 1974, South East Asian Cup, Kuoshu Lei Tai in the 1920's and 1930's. Chang Dongsheng, Hong Yixiang, Chan Tai San, Wang Zi Qing, Zhao Dao Xin, Zhu Guo Lu. Truth is not black and white. There are no easy answers."
Posted by Owen_Schilling at 4:18 AM No comments: