Posted by Owen_Schilling at 5:27 AM No comments:

7 Star: Qixing Fundamentals - Marcus Brinkman
My teacher Marcus Brinkman - Learn Xingyi Quan & Bagua Zhang at Boulder Internal Martial Arts
"various clips which refer to the 7 Star Step, concept, and usage in accordance with Xingyiquan and Baguazhang"
Posted by Owen_Schilling at 3:49 AM No comments:

"Miáodāo - a long saber? In today's martial arts circles the word is exclusively associated with a large two-handed saber, and only the top example in the above picture would be recognized as a miáodāo. Understandibly so, because the single handed narrow saber, also known as the liǔyèdāo (柳葉刀), gradually fell out of use not long after the fall of the Qing. It got replaced by the iconic niúwěidāo (牛尾刀) that is seen in the hands of every martial artist from the 1930s, and so the only narrow saber that remained in use was the long variety." - Peter Dekker

Posted by Owen_Schilling at 5:19 AM No comments:

"Ma Deyun is one of the leading masters of the less known system of Xinyi Liuhe Quan practised in Luoyang. While the more popular branch from Lushan/Zhoukou has received more attention due to the efforts of the disciples of Yuan Fengyi, especially Lu Songgao, who taught in Shanghai, the Luoyang system has remained relatively obscure and has been taught within the muslim communities of the city only. It comes from Ma Xing, student and relative of Ma Xueli, who was not only a skilful martial artist, but also a well educated military official. While Luoyang system differs from the Lushan/Zhoukou branch, their theory and principles remain the same. On this video Ma Deyun, the disciple of famous Jin Heiyan demonstrates and explains the applications of the key basic method of the system - Dan Ba (Single Seize).

What makes the video really interesting are the principles of the system behind these simple applications: importance of footwork (old Xinyi Liuhe Quan boxing manual speaks of "defeating all under heaven with the old rooster shape" - Rooster Shape focuses on developing footwork), following the movements of the opponent and adjusting ones stance accordingly (against common idea of xinyi/xingyi as systems with "going through the wall" mindset), fighting in close distance and using the body rather than just hands.

Great attention is paid to the correct position of the feet, especially the front foot, which "seizes the ground", while the rear one is the engine behind the movement and its applications. It shows how direct yet at the same time sophisticated the system is, and how various skills - coordination, footwork, using body - must be developed first to make its techniques effective." by Jarek Szymanski

"The Qing imperial regulations, the Huangchiao Liqi Tushi, lists no less than 7 types of Chinese two-handed sabers with long grips issued during the dynasty. In this episode, Scott M. Rodell looks at a rare variant, the Qing period Wōdāo (窩刀). This dao was issued to the Lùyíng (綠營), the Green Braves.

The Lùyíng were the ethnically Han Army. Manchus, Mongols and some Chinese who joined the Qing cause early on formed the Eight Banners. With the majority of Han people being drafted into the Lùyíng or Green Braves. The Wō character used here is a homonym for the Wō in Wōkòu (倭寇). In that case it means Dwarf Bandit a derogatory term for the Japanese. Here is has the meaning of a small place, or a place where animals live, or a place where a group of bad people gather. So this sword is the Qing take on the Katana. The regulations stipulate that the blade be curved like a Lùyíng Piāndāo  (綠營㓲刀), the slicing saber which is depicted in the regulations with an accelerating curvature, as see on this example.

Some have mistaken the Wōdāo, this Chinese version of a katana, with the Miáodāo (苗刀). There are however two important differences, the blade and hilt lengths. The Wōdāo has a 31” blade that is balance by the long grip such that it is easy to wield with one hand. The Miáodāo is a true two-handed saber with on average a 35” long blade . While they make look the same in a photo, any practitioner will notice the difference straight away. They are indeed two very different weapons" Scott Rodell.

Posted by Owen_Schilling at 5:44 AM No comments:

Posted by Owen_Schilling at 6:01 AM No comments:

The Northern Praying Mantis Style - Brendan Lai 黎達沖 Forms and Applications
Posted by Owen_Schilling at 5:44 AM No comments:

"Madame Sun Jianyun (1914-2003) was the daughter and main inheritor of Sun Lutang's martial art system, and specialized in its core methods of "three barehand styles three straight swords": empty hand and sword methods of Xingyi, Bagua and Taiji. Sun Lutang, arguably the most influencial martial artist of the internal family, learnt Wu Yuxiang style Taijiquan from Hao Weizhen after being an accomplished master of both Xingyi and Bagua; later in his life Sun created own style of Taijiquan; he incorporated key elements of all three systems he had studied into the body of Taijiquan. Sun style Taijiquan contains the quintessence of his life-long pursuit for perfection on the path of martial arts - which is described by the concept of Zhonghe - Central Harmony, permeating all its methods. This rare video was taken in 1978, when Madame Sun was 64, and is her earliest known complete demonstration of Sun Style Taijiquan. For more information about traditional martial arts of China please visit: www.ChinaFromInside.com"  by Jarek Szymanski
Posted by Owen_Schilling at 6:29 AM No comments:

"A very rare video of taoist master Guo Gaoyi demonstrating part of Wudang Taiyi Xuanmen (Taoist) Sword. Guo Gaoyi (1924-1996) was the first head coach of martial arts in Zixiao Palace, one of the main taoist temples in Wudang mountains, between 1983 and 1989.

Born in Shangqiu in Henan province, Guo studied Shaolin styles since childhood. During the anti-Japanese war in 1930 he traveled to north-eastern China where he learnt sword and Taijiquan from Yang Kuishan, a disciple of general Li Jinglin. After his batalion was defeated Guo retreated to the temples in Lüshan in Liaoning province, where he was initiated as a taoist monk. This is where he learnt Wudang Sanfeng martial arts from master Yang Mingzhen. Not much is known about Guo's whereabouts until early 1980s - only that during the Cultural Revolution is was forced to become a layman and return to his hometown - and could "return to Tao" only in 1981. He became a monk again, living in the temples on the White Could Mountain in Biyang County in Henan, where he studied martial arts from Tang Chongliang. Tang studied martial arts Wudang Mountains from Wang Xintang, a taoist master of the Eight Immortals Temple, but also received guidance from famous Wudang abbot Xu Benshan.

When his master passed away in 1983 Guo left White Cloud Mountain and moved to Wudang. In 1984 he became the head coach of the taoist martial arts academy at Zixiao Palace. In 1989 Guo left Wudang and in 1990 retreated to Shennongjia to practice meditation. In 1993 he moved to Nine Palaces Mountain, where he passed away in 1996. Guo was one of my taoist inspirations - the photos of him demonstrating swordplay featured in "Pictorial China" in mid-1980s were one of the reasons that set me on the path and travel to China. Unfortunately when I entered the gate of Zixiao temple in July 1991, Guo was already Shennongjia, in the area the foreigners were not allowed to enter. This part of my China dream has never become a reality and I never managed to meet him." - Jarek Szymanski

For more information about traditional martial arts of China please visit: www.ChinaFromInside.com
Posted by Owen_Schilling at 1:49 AM No comments: 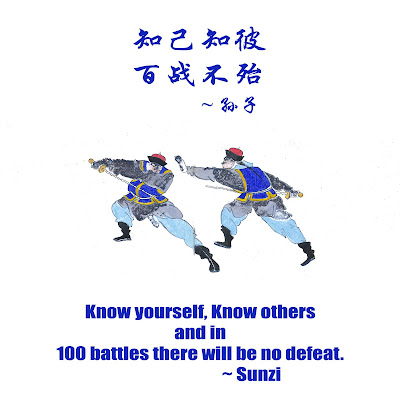 Sun Zi - Know Yourself
Found HERE
Posted by Owen_Schilling at 5:55 AM No comments: