Posted by Owen_Schilling at 6:31 AM No comments:


Bak Mei - The White Eyebrow Monk
"(from wikipedia) is said to have been one of the legendary Five Elders — survivors of the destruction of the Shaolin Temple by the Qing Dynasty imperial regime (1644–1912) — who, according to some accounts, betrayed Shaolin to the imperial government."

Báiméi dìshà quán / Bak Mei Dei Saat Kyun - demonstrated by Master Chen Zhong Liang / Chan Jung Leung. As the name indicates this form teaches Bak Mei's methods of both fighting on the ground and even more so against someone on the ground.

Posted by Owen_Schilling at 6:31 AM No comments:

Matt Autrey is a senior student of Yi Zong teacher Luo De Xiu. Matt is back in the United States after 8 years of training Bagua Zhang, Xingyi Quan, Tai Ji Quan in Taipei, Taiwan including 5 years with Marcus Brinkman as a private student. Matt spent many years teaching and assisting in Luo Laoshi’s class in Taiwan, his extensive knowledge and command of the internal martial arts is an asset to any practitioner.

Saturday, November 3rd - Morning Session - 12:45pm to 3:45pm
Whipping Palm - in Xing Yi, Bagua and Taiji  - Training Methods and Applications. –
This will be an excellent introduction to the Whipping Palm method. Learn fundamental training practices, footwork, and applications of Whipping Palm as it is found in all of the big three Chinese Internal Martial Arts; Tai Ji Quan, Xingyi Quan and Bagua Zhang. This seminar is open to public and beginners are welcome.

Saturday, November 3rd - Afternoon Session – 4pm to 6:30pm
Beng Quan – Basics and Its Role in the Xing Yi Quan Linking and Retreating Forms
In this seminar Matt will cover Beng Quan – the famous Xingyi “Crushing Fist”. This seminar cover traditional Beng Quan theory as it relates to Xingyi Quan and usage of the fist. This seminar is open to public and beginners are welcome.

Sunday, November 4th - Morning Session - 12:45pm to 3:15pm
Push Hands Training – Sensitivity Development for Push Hands
Matt will be teaching exercises and drills used to develop and train the Push Hands format. These two person training drills will help build reflexes, timing and distance required for the usage of Bagua Zhang, Xingyi Quan or Tai Ji Quan in a combat setting. He will also teach applications and fighting strategies for usage in Bagua Zhang, Xingyi Quan and Tai Ji Quan. Previous knowledge of any type of push hands training is recommended. This seminar is open to public

Sunday, November 4th - Afternoon Session – 3:15pm to 6pm
Skill Building – Elbow Carrying – Attacking and Controlling
In the Yi Zong system the training and use of of the rear hand is a unique feature of our Xingyi Quan, Tai Ji Quan and Bagua Zhang. In this seminar Matt will teach usage, function and application of the Elbow/ Rear Hand method. This seminar is open to public and beginners are welcome.

FOR INFO AND LOCATION EMAIL:
Owen Schilling at mailto:Owen_YiZong@Hotmail.com

Posted by Owen_Schilling at 6:33 AM No comments:

I want to thank Luo De-Xiu and Marilyn Heidrick for all the great work the put in the past weekend to make the 2012 Denver Bagua & Tai Chi Seminars seminars happen! 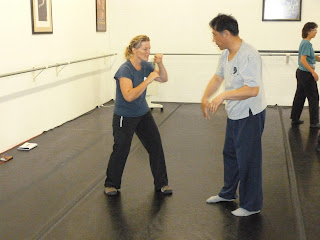 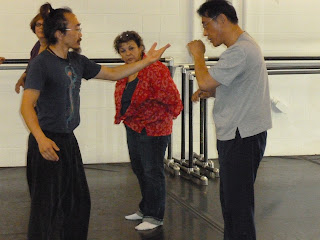 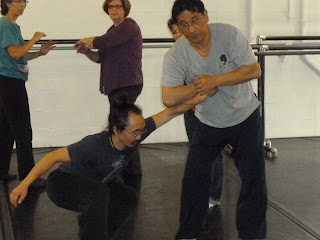 Posted by Owen_Schilling at 3:13 AM No comments:

Posted by Owen_Schilling at 5:20 AM No comments:


Posted by Owen_Schilling at 5:48 AM No comments:

From the TheaSinensisSerpenti
"Sha Guozhen is a legend in Chinese martial arts.
He began studying martial arts as a child. He started learning Bagua at 16 studying under Wang Lide's student Wang Chiche. Wang Lide had been a student of Dong Haichuan and practiced "Lion style" bagua. Although he later studyed under many other great masters of bagua including Jiang Rongqiao his bagua always carried some of the characteristic of the lion style he first mastered.
Eventually he combined his experience in bagua and knowledge of Wang Lide's Lion style, Jiang Rongqiao's bagua, Sun style Bagua, and the various other bagua styles he had come into contact with into his own form.
Bagua was not his only focus, during his lifetime he studied many different styles and was well known for his XingYi, Six Harmony Spear, and Wudang Sword.
He was also known for his bravery in fighting against the Japanese occupation during the Sino-Japanese war.
During the later years of his life he dedicated his time to teaching martial arts as well as setting up a free clinic to use his knowledge of Chinese medicine to provide free treatment to those in need where he lived in Yunnan province, as well as donating his extensive collection of traditional Chinese medical texts and recipes to to the public."

Posted by Owen_Schilling at 7:44 AM No comments:

Posted by Owen_Schilling at 4:45 AM No comments:

Congratulations (once again) to my friend Tim Shirley on his win at the  IBJJF Montreal Open. (Tim is in the center).

Posted by Owen_Schilling at 6:23 AM No comments:

Posted by Owen_Schilling at 9:46 AM No comments:

Posted by Owen_Schilling at 3:32 AM No comments: