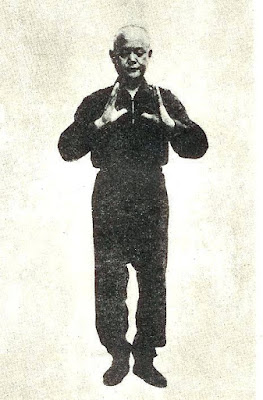 站立樹樁 Zhànlì Shù Zhuāng (Standing Erect Tree Stump) mimics the ability to stand as if the rooted stump of a tree that stands erect, straight, yet pliable like a 樹苗 shùmiáo (sapling). Standing practice requires that one’s natural desire to move be restrained as if holding back on the reigns of a horse that is about to gallop. Movement is generated by the activity of 氣 qì. To gather qi from heavenly sources [those forces which are active] beget the natural transmutation of movement. Master Sun Lu-T’ang, like many Chinese boxing masters, taught that standing practices are the original methods that the Immortals employed to feed their ethereal bodies. Not being of mortal flesh their need to feed upon the qi of Heaven and Earth is resolute. Standing among the mountains and clouds the Immortals inhale harmonious vapors [qi] and exhale turbid remains [turbid qi].
The way of the Immortals is a pure path to follow. They beckon all to adhere to their practices. Master Sun said that such methods were taught to him by his master, Guo Yun-Shen. Master Guo was said to have learned the ways of the Immortals by monks who live in the region of Huang Shan (Yellow Mountain), where the Immortals often come to play and feed. They are often observed standing in various poses during the early morning when dew begins to form. Their standing is without a single stirring motion, yet onlookers speak of the Immortals having a frost [a glistening-cloudy glow] gathering about them. I asked Master Sun what is this frost? He answered that it is the light from the other side. I did not understand his meaning at that time and he would speak no more about this until years later.
I always asked my master many questions, though he gave few responses at first. I learned from his example that questions and responses are not without merit, though it is attaining an answer without having asked a question that must be sought. The answer often shows itself before the question is asked. This is the way of true learning. In standing practices I followed the methods taught by many; stand and absorb the qi, quiet the spirit, and seek to transform. To seek was my undoing, as it has been for many. Master Sun said that Master Guo taught that the action of seeking is as motion, both are the Great Inhibitors. His meaning is that in standing practices one must stand within a pool of stillness that has no ripples of thought, for thought brings forth seeking answers and accomplishments which inhibit the purity of one’s intent. Therefore, to accumulate qi and internal force one must not seek accumulation. To find stillness within one must not search for stillness. To search is the action by which transformation is abated. Empty the kettle, then it can be filled. To understand that which Master Sun has spoken on is to have taken the initial step into the practices of standing.
Standing requires that one become like a 李樹 lǐshù (plum tree) that is weighted with its fruit. Heavy, steadfast, and blossoming with essential vigor, this tree represents yang jing (generative force) within one’s body. To stand in the presence of Nothingness [the absence of mindful activity]) is to stand with the Tao.
Written and Translated by Brad Tyrey - Purchase his books HERE
Found HERE
Posted by Owen_Schilling at 3:41 AM No comments:

Xu Fan Ceng is student of Cheng TingHua's son Cheng Youxin. This video is demonstrating "Covering Hand Palm"
Posted by Owen_Schilling at 4:39 AM No comments:

Posted by Owen_Schilling at 2:13 AM No comments: 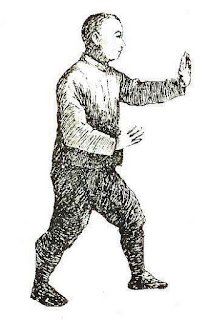 Found: HERE
Posted by Owen_Schilling at 5:04 AM No comments: 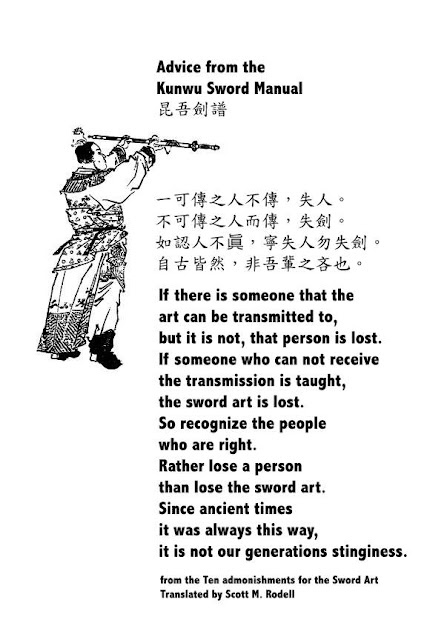 If there is someone that the art can be transmitted to, but it is not, that person is lost. If someone who can not receive the transmission is taught, the sword art is lost. So recognize the people who are right. Rather lose a person than lose the sword art. Since ancient times it was always this way, it is not our generations stinginess.

from the Ten admonishments for the Sword Art Translated by Scott M. Rodell

Found HERE
Posted by Owen_Schilling at 4:45 AM No comments: 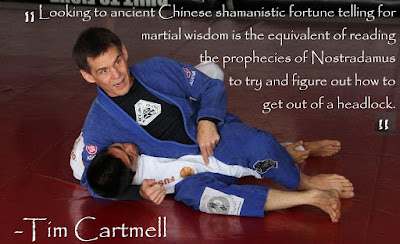 "Looking to ancient Chinese shamanistic fortune telling for martial wisdom is the equivalent of reading the prophecies of Nostradamus to try to figure out how to get out of a headlock." - Tim Cartmell

Quote from: Grounddragonma.com
Posted by Owen_Schilling at 5:28 AM No comments:

Xingyi Quan with Master Zhao Yongchang
Posted by Owen_Schilling at 4:54 AM No comments: 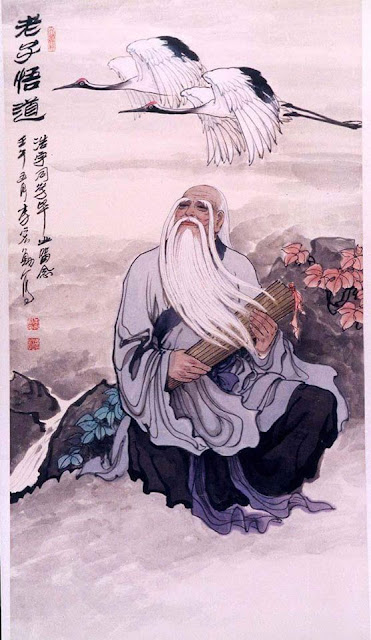 Those who know do not talk.
Those who talk do not know.

Keep your mouth closed.
Guard your senses.
Temper your sharpness.
Simplify your problems.
Mask your brightness.
Be at one with the dust of the Earth.
This is primal union.

He who has achieved this state
Is unconcerned with friends and enemies,
With good and harm, with honor and disgrace.
This therefore is the highest state of man.

Found: HERE
Posted by Owen_Schilling at 4:53 AM No comments:

"Speed is one of the five essential elements of Chinese Swordsmanship (Jiànfǎ, 劍法). Cutting an arrow in flight is the ultimate test of a Swordsman’s skills. The Japanese refer to this skill as Yadome no jutsu (the military study of arrow cutting or blocking), considering it an indicator of superior martial prowess. Scott M. Rodell, director of the Great River Taoist Center, draws his jian (sword) slicing an arrow shot at him from just over 15 meters away. Traveling at 70.2 mph (113 kph) the arrow flies 51’ (15.5 m) in .48 of a second. Drawing his jian (sword) from the scabbard, his Liāo cut (撩) sliced it neatly in two."

Posted by Owen_Schilling at 5:39 AM No comments: