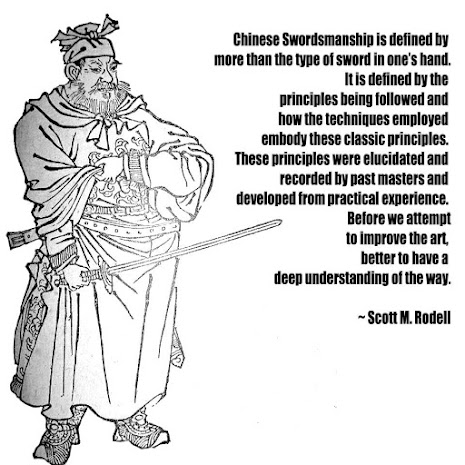 Chinese Swordsmanship is defined by more than the type of sword in one’s hand.

It is defined by the principles being followed and how the techniques employed embody these classic principles. These principles were elucidated and recorded by past masters and developed from practical experience. Before we attempt to improve the art, better to have a deep understanding of the way.
~ Scott M. Rodell
Posted by Owen_Schilling at 4:02 AM No comments:

Email ThisBlogThis!Share to TwitterShare to FacebookShare to Pinterest
Labels: Chinese Swordsmanship is defined by more than the type of sword in one’s hand.

"After the Qing Defeat in the Sino-Japanese War, steps were taken to modernize the Chinese military. Yuan Shikai was tasked with organizing the New Army with the aid of German advisors. In addition to adopting new uniforms, modern rifles, machine guns and cannon, they also adopted a European Military style saber. This video looks at five examples of these late Qing sabers and the history that lead up to their use."

Posted by Owen_Schilling at 3:55 AM No comments:

Posted by Owen_Schilling at 4:09 AM No comments: 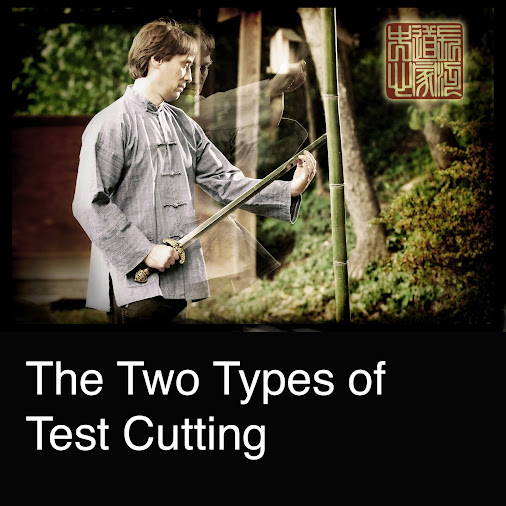 The Two Types of Test Cutting

"When I began cutting practice, no one was test cutting with Chinese swords. In fact the common refrain was that straight swords like Jian didn’t cut well, or at all. Aside from oral transmission, there was no foundation from which to begin training. Fortunately, I was good friends with Paul Champagne, a noted swordsmith with decades of cutting experience. I was quite fortunate to have him as my cutting mentor.
The first important point Paul clarified is that there are two types of cutting. The first type of cutting tests the sword. The second type tests the sword and swordsman. The first type of cutting requires only two components, proper edge alignment and a powerful enough swing. Since the objective of the first type of cutting is to simply test the sword, the sword is typically swung through a much larger arc than necessary. This almost always ends with the sword swinging well past the target. When the sword is swung through such a wide path, from the view point of swordplay, the weapon is well out of play. This is one notable manner that these two types of cutting differ.
In my next post on Test Cutting I will elaborate the four parts of a correct cut. All the best to everyone in their training." (attached photo of Paul Champagne) - Scott Rodell
Found HERE
Posted by Owen_Schilling at 5:44 AM No comments:

Posted by Owen_Schilling at 6:02 AM No comments: 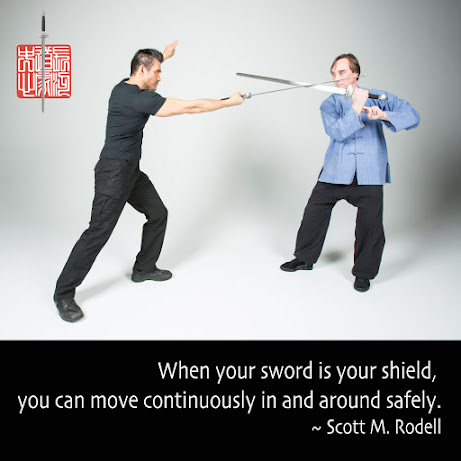 When your sword is your shield, you can move continuously in and around safely.

Posted by Owen_Schilling at 5:18 AM No comments:

Email ThisBlogThis!Share to TwitterShare to FacebookShare to Pinterest
Labels: Chinese Sword - Scott M. Rodell, When your sword is your shield, you can move continuously in and around safely.

Posted by Owen_Schilling at 5:46 AM No comments:

Posted by Owen_Schilling at 5:30 AM No comments:

" According to the New Current Affairs Newspaper on August 20, 1930, after visiting Jpaan and training in Japanese martial arts, representatives of the Central Martial Arts Academy believed that the top priority of Chinese martial arts in this period was to eliminate the number of fancy methods and promote techniques suitable for practical applications".

State attempts to control and appropriate the martial arts:
Phase One: Republican China

While some individual martial artists had gained status and social acceptance, as a group they continued to present a problem to central authority. Martial arts schools produced trained fighters who remained loyal only to their own teachers and traditions. Many still supported groups which openly challenged the newly established government.

The Nationalist Party (Guomindang) waswell aware of the role of martial artists in popular rebellion. In fact, Dr.Sun Yat-Sen, the founder of the party, had himself maintained numerous secret society associations and had extensively used “Red Pole” enforcers. Thus, once Chiang Kai-Shek had solidified his position, he turned his attention towards attempts to control and appropriate the practice of martial arts.

In 1928, a year after Chiang Kai-Shek’s “White Massacre” in Shanghai had left him the undisputed leader of the Nationalist Party, several steps were taken to exert control over martial artists. First, the government adopted the term “Kuo Shu”. This term means literally “national arts” and was an attempt not only to reduce the factionalism among martial artists but also to promote nationalism (and thus loyalty to the state).

Communists executed in streets of Shanghai

In 1929, a similar event was held in Hangzhou, China. This event was also organized by Li Jinglin, then acting as vice-dean of the Central Martial Arts Academy. This time there were 125 entrants for the “boxing” or “free fighting” (San Shou) competition which was held November 21-27. The event was very popular, the audiences every day numbered in the tens of thousands.

The same year, the governor of Guangdong Province invited some of the institutes’s masters (including some of those that had competed in the 1928 lei tai) to come south to establish a “Southern Kuoshu Institute”. General Li Jinglin chose five masters to represent northern China. These men were known as the Wu hu xia jiangnan (五虎下江南 – “Five tigers heading south of Jiangnan.

Martial artists who participated in the institute but remained in China after the communist victory in 1949 have consistently denied any direct government involvement, for obvious political reasons, but in reality its establishment put martial artists under direct government regulation. Teachers in Taiwan are far more forthright, openly acknowledging that the government was involved in “an active program” to reorganize the martial arts. The stated goal of the institute was to “consolidate Kung-Fu by bringing together many great masters.” Thus, while the Nationalist Party was less successful, it was involved in a strikingly similar program to the one that the Chinese Communist Party (CCP) under took with the creation of contemporary Wu-Shu.

In 1933, the institute again hosted the national competition. The rules said, “…if death occurs as a result of boxing injuries and fights, the coffin with a body of the deceased will be sent home.” Some of the top winners of this contest included Chang Dung Sheng of Shuai Jiao. He won the heavy weight division and earned the martial nickname “Flying Butterfly.”

Attempts to control and appropriate the martial arts, like most Nationalist social programs, was largely unsuccessful. The government lacked a well-developed structure at the grass roots level and corruption was rampant. In addition, many of the most powerful members of the Nationalist Party were themselves martial artists. According to Draeger and Smith, the martial artists in Taiwan, many of whom were Nationalist Party members and military officers, “were a truly diverse lot: many were illiterate, some took opium regularly, a few were scoundrels.”

Posted by Owen_Schilling at 5:17 AM No comments:

Posted by Owen_Schilling at 5:37 AM No comments:

Tricks to Landing the TEEP Part 1

Tricks to Landing the TEEP Part 1

Posted by Owen_Schilling at 5:31 AM No comments:

Email ThisBlogThis!Share to TwitterShare to FacebookShare to Pinterest
Labels: Tricks to Landing the TEEP Part 1

Posted by Owen_Schilling at 5:53 AM No comments:

Posted by Owen_Schilling at 4:34 AM No comments: