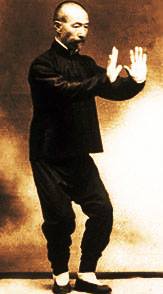 1. 靈活 linghuo (nimbleness/agility). In all movement 陽氣 yang qi must be directed and established at the point泥丸 Ni Wan (Mud Ball) which sits upon the crown of one’s head. Through qigong practice the 泥丸 Ni Wan (Mud Ball) becomes active and is then linked with its mirrored point below, that being 會陰 Hui Yin (Meeting of Yin) at the perineum below. This establishes the 陰 yin and 陽 yang duality within movement. The cohesion of these two points is accomplished through seated neigong (inner development) methods to enhance the ‘Small Heavenly Cycle.’ These methods are not exclusive to the Sun family style and are found within many Taoist boxing sects. As these upper and lower points harmonize through practice one will notice that physical movement in taijiquan becomes rooted, yet the trunk, arms and legs move with a feeling of fluid nimbleness, a sense of increasing agility and lightness; the meaning and importance of 靈活 linghuo. Such is the result of 陽氣 yang qi fusing deeply within all parts of the body and moving along with and merging with the 陽氣 yang qi of Nature.

2. 靈感 linggan (inspiration/insightfulness). In practice we must never fall prey to mere physical movement that possesses no essence, no spirit behind an action. To simply move about in xingyi and bagua, flailing one’s arms and legs without 意 yi (intent) beckons no lasting results. One must look into the meaning of each posture with a conviction of insightfulness to look beyond the physical surface. It is easy to understand the many applications of any posture, none are secrets, but to be inspired to pursue deeper skills within each posture is very important toward acquiring greater levels of competency. There are many explanations of 靈感 linggan which we touch upon each day in practice. As we practice taijiquan, for example, suddenly you understand how to do something that you have struggled with, and it is this realization and understanding that is the foundation to follow further interest into that realization of a posture or action which produces 靈感 linggan (inspiration/ insightfulness) from which to find further explanation. My father taught that 靈感 linggan is what separates a good student from those who excel. It is something he emphasized that his students nurture throughout all aspects of their boxing practices.

3. 靈驗 lingyan (to be efficacious/accurate). In the boxing arts it is easy to move about and appear knowledgeable and skillful to a novice. But to someone who has trained most properly in traditional methods it is important to examine each posture in terms of use as to health, martial application, and spiritual wellbeing. Therefore, each action must be thoroughly examined from many perspectives. In fighting application it is important to that each movement be very accurate without the slightest embellishment which would lead to inefficaciousness. In pursuing health through qigong and taiji the pathways of qi throughout one’s body must be carefully enhanced through the expansion and contraction of movements entwined with Taoist breathing methods to further bolster qi. This is not difficult nor complicated but requires that you 驗 yan (examine) all aspects of a posture and technique so that a high level of 靈驗 lingyan (accuracy) can be attained. Again, this is not secret to any boxing art but is an important principle that is often overlooked.
The 三靈 Sanling (Three Spirits), referred to as the 三珤 Sanbao (Three Jewels/Treasures), are
therefore: 靈活 linghuo (nimbleness/agility), 靈感 linggan (inspiration/insightfulness), and 靈驗 lingyan
(to be efficacious/accurate). These three, with time and practice, merge and transform to affect one’s
靈魂 linghun (soul). Master Sun remarked that ‘it is one’s靈魂 linghun (soul) that dictates the profound
aspects of study.’ My translation of the 三珤 Sanbao (Three Jewels/Treasures) are rudimentary at best as
each of their true meanings can only fully be understood through experiences and examples pointed out
each time by one of our teachers. But my translation will hopefully serve as a foundation.
Madam Sun added that when her father taught military officers in Nanjing they were very concerned with
the soul of each soldier in respect to creating 大膽 dadan (big courage [fearlessness]). Therefore, Master
Sun taught qigong exercises to officers and soldiers to enhance the 膽 dan (gall bladder). This method is
called 壯膽功 zhuangdan gong which means ‘to achieve [to develop] in strengthening the gall bladder,’
in turn meaning ‘to strengthen courage.’ Master Sun consequently taught the 二十四站走步樁 ershisi
zhan zoubu zhuang (24 standing and walking posts [stumps]) that he learned from his bagua
master, Cheng T’ing-Hua. These methods were openly taught to all of his students, both public and indoor, and were never kept secret as they were to serve as givers of health for one’s 精神 jingshen (essence and spirit [vitality]) rather than to do harm martially. Each of the 24 methods, practiced while standing or while walking a circle, taught and enhanced 24 specific principles and skills. Once
these 24 were learned then the final 12 were added which were concerned with 12 animals to total 36 methods. These methods were openly taught but many students, many of my classmates, simply felt the number were so many that they gave up after a dozen or so. Generally, 3 methods were taught each month, so time was required. Over the years, when I revisited my classmates, most had forgotten the majority of these postures and only practiced those that came to mind. However, there were some who
continued to reverently practice these methods and passed them on to their students exactly how they
were taught to us in class in Beijing. Today, I am happy to openly teach the entire 36 methods to those interested as they are not secret, but simply somewhat rare to come across in their entirety. I still fondly remember classes when I would see many senior classmates in class performing all 36 post/stump methods, openly sharing them their apprentices. It was a very rich environment in which to learn that I know all of you would have loved. Hopefully, I can bring much of this to you through my writings. More about this in Part 2 of this article.

Thank you very kindly for taking the time to read my articles and supporting my efforts to share with each
one of you,

Found on FB HERE
Posted by Owen_Schilling at 4:54 AM No comments:

"Fluid body Taichi (Mind and body awareness): Movement starts on the foundation of a posture, by the direction, are set to motion and expresses movement. Imitation of posture and repetition of motion are the means for memorizing "posture and motion." If "posture" and "motion" are memorized, the elucidation of the basis and practice of a principle are required. "Duplication of posture" and "repetition of motion" are blind obedience of school form. Studying the posture performed itself, a basis of operation, and a principle leads to consciousness of mind and body.   Reference http://www.essenceofevolution.com"
Posted by Owen_Schilling at 5:30 AM No comments: 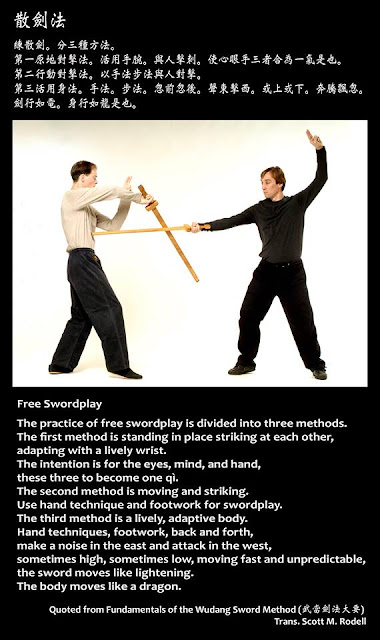 The practice of free swordplay is divided into three methods.
The first method is standing in place striking at each other, adapting with a lively wrist. The intention is for the eyes, mind, and hand, these three to become one qì.
The second method is moving and striking. Use hand technique and footwork for swordplay.
The third method is a lively, adaptive body.
Hand techniques, footwork, back and forth, make a noise in the east and attack in the west, sometimes high, sometimes low, moving fast and unpredictable, the sword moves like lightening. The body moves like a dragon.

Commentary and Notes: In this chapter on swordplay, the author follows a common plan of development seen in Chinese martial arts, namely moving from fixed step two-person exercises to moving step set routines. Naturally, students commence training in these exercises after techniques have been learned and thoroughly practiced through solo forms and drills. Once the student has integrated the hand techniques with their footwork through the moving-step two-person forms, they can then move on to actual free play.

A common error, particularly amongst newer sword students is to always give distance, retreating to neutralize attacks. The problem with this is that once out of distance, one cannot counter-cut. This allows the opponent to control the flow of the action. By making sure the beginning swordsman has a sound foundation in his or her hand techniques, meaning he or she can properly deflect and counter-cut before adding footwork to the response to an attack, the student prevents this error of excessive or unnecessary footwork.

The author describes developing a lively wrist as part of the first step in learning free sword. The word for lively used here is huó (活). Huó means loose or lively, but in this context it does not simply mean the the ligaments are loose and adequately stretched out. It means that one is able to adapt quickly and easily to any given situation. The quick changes that provide jiànfǎ with its versatility, rely on this lively wrist.

“Make a sound in the east, hit in the west” is a classic Chinese strategy idiom for creating a diversion.

Found Here
Posted by Owen_Schilling at 4:23 AM No comments:

My teacher Marcus Brinkman - Learn Internal Kung Fu at Boulder Internal Martial Arts
Posted by Owen_Schilling at 3:03 AM No comments: 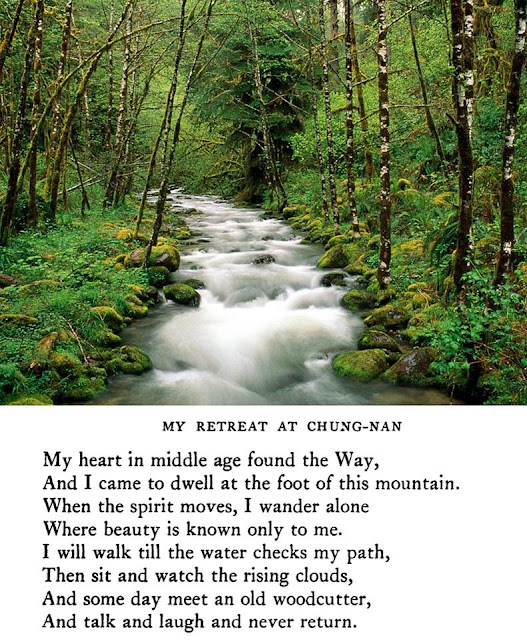 A poem by famous Tang poet Wang Wei - found on FB
Posted by Owen_Schilling at 11:27 PM No comments:

Posted by Owen_Schilling at 6:11 AM No comments:

Email ThisBlogThis!Share to TwitterShare to FacebookShare to Pinterest
Labels: Best of Judo Ippons 2018 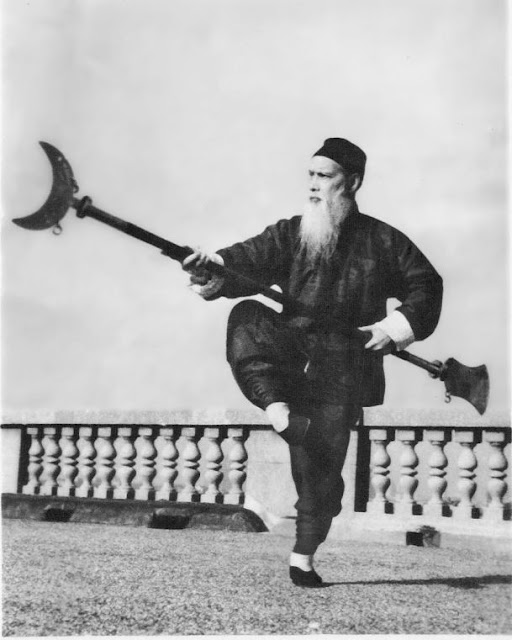 Introduction
Wang Ziping (1881-1973) was an iconic figure within the world of the Republican martial arts.  Having gained fame through his many feats of strength and public fights, the Muslim martial artist from Heibi province went on to hold important positions in the Central Guoshu Institute.  Indeed, he was one of the few Chinese martial artists ever discussed by name in the New York Times prior to the Kung Fu Craze of the 1970s.  Readers may recall that I recently wrote a brief biographical sketch of this important figure which you can review here.
READ THE REST (WORTH THE READ) HERE
Posted by Owen_Schilling at 7:49 AM No comments: 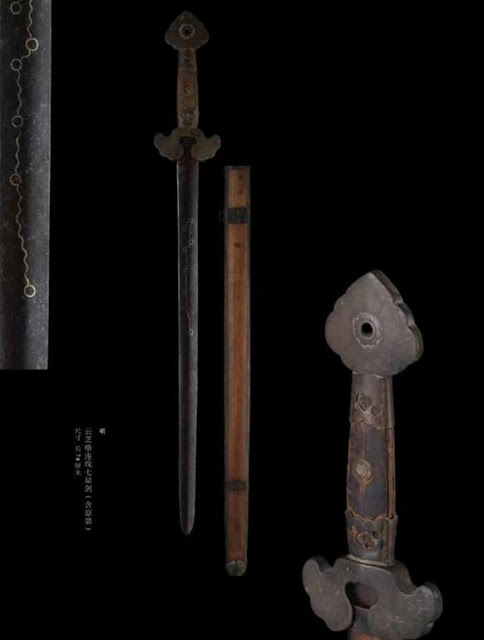 Posted by Owen_Schilling at 6:18 AM No comments: 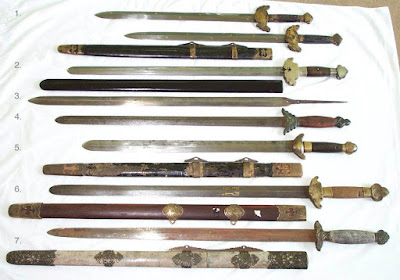 Late Qing Jian — at Seven Stars Trading Co.
Posted by Owen_Schilling at 4:18 AM No comments:

The Greatest Japanese Movie Sword Fight OF ALL TIME!

Posted by Owen_Schilling at 4:36 AM No comments: 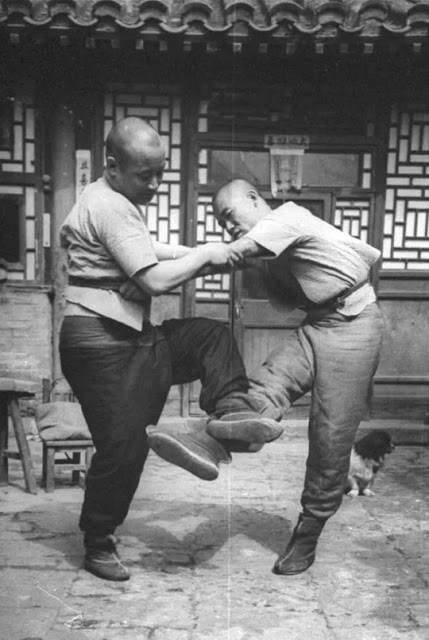 Posted by Owen_Schilling at 2:30 AM No comments: