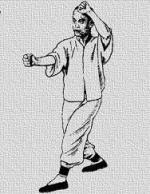 Li Luoneng resided to Taigu County of Shanxi Province for business purposes at the age of 37 in 1845 and he began to learned Dai family version of Xinyiquan during the same year. Li started martial arts at young age and he was skilled in the art of Tongbeiquan before he learned Dai family’s boxing. Li established himself as a great martial artist in Shanxi, which also earned him the nickname of Divine-Fist-Li (神拳李), within 10 years of after he started in Dai Style Xinyi.

From: http://www.xingyimax.com/li-luoneng
Posted by Owen_Schilling at 8:44 AM