The Faded Martial World (book) 李仲軒 逝去的武林
Li Zhong Xuan was a Xingyi practitioner that trained under 3 famous masters, Tang Wei Lu, Shang Yun Xiang and Xue Dian.  His book, 逝去的武林 The Faded Martial World (my translated title) is a fantastically down to earth diary of his martial journey.  It is a day to day description of what transpired and shows how old school martial artists trained.  While it isn’t meant to be a guide to teach anyone Xingyi, it contained many great gems that are considered secrets in many schools.  I have not seen any English translations and the following are tidbits I translated as an exercise years ago.  Philip D 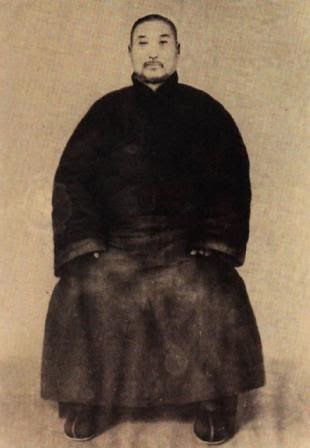 Teacher Li said when he was a teenager he liked (singing) Chinese opera the most, followed by martial art training.  At the time his home was located in Ninghe and he had hired a martial art teacher to teach in the ancestral shrine.  One time after training he felt completely refreshed and started singing Beijing opera out of sheer joy.  He was reprimanded harshly by the teacher.  The teacher said that one should not even talk after martial training, as otherwise [vital essence] (元氣) would gush out and the person would grow weaker and die early, let alone sing.  The martial teacher’s name is Tang Wei Lu.  When Xue Dian (薛顛) first became head of the martial art academy (likely the Nanking Central Kuoshu Academy), there were some challengers that he couldn’t face himself due to him having to [give face/respect to his seniors]?? (輩份情面) so Tang Wei Lu fought in his place a few times.  Tang Wei Lu was famous for his leg skills and Shang Yun Xiang was the person he respected the most.  The Beng quan (崩拳) passed down by Shang Yun Xiang has a jumping movement similar to the Dragon form (龍形).  One time when Tang Wei Lu and Shang Yun Xiang went to watch Chinese opera and were somewhat late, they chose to traverse the empty alleys so they could use their leg skills.  Tang Wei Lu was tall and had long legs, he [walked speedily] (疾走, maybe he was running) and ended up with a lead.  Shang Yun Xiang was short and fat and had fallen behind a few steps, but he caught up with a leap from a Beng quan.  Tang Wei Lu had received a medical prescription from Li Cun Yi called ["Five Element Paste"] (五行膏), used for after suffering life-threatening injuries from duels.  There were few within the Xingyi Gate (形意門, refers to the school/lineage of Xingyi) that received this prescription.  Tang Wei Lu had passed the prescription to Li Zhong Xuan and let Li Zhong Xuan [inherit his entire teaching] (受了自己的全部傳承).  However, Tang Wei Lu considered himself to be just a no-name rural martial artist, and in order to further his disciple’s development, he asked Shang Yun Xiang to accept him as a disciple.  At the time Shang Yun Xiang was already advanced in age, his disciples already had disciples and his lineage has already spanned two-three generations, while Li Zhong Xuan was not even twenty.  With regard to Tang Wei Lu’s request, Shang Yun Xiang said that he could accept Li Zhong Xuan as a disciple, but Li Zhong Xuan must not accept disciples in the future, as otherwise the [seniority] (年齡與輩份) in his gate/lineage will be in disorder.

Teacher Li Zhong Xuan (author has switched to his perspective) did not train with Shang Yun Xiang for a long time, just intermittently for two years.  According to him, [prior to achieving adequate skills] (拳術未成時, adequate here may actually mean mastery because Chinese traditionally value modesty), he went to Shanghai to look for a job and had been very busy.  After Shang Yun Xiang passed away, he gradually lost contact with the martial community.  He told me that the reason he taught me martial art was because he felt my passion for martial art would not last long, so he might as well try it for a bit.  As I recall, he was really dispirited and lonely in his old age.  He probably just wanted to find some joy in life by teaching a child.

The Xingyi book I bought, “Illustrated Canon of Xingyi Five Elements” was written by [Jin Yun Ting] (靳雲亭), who was also Shang Yun Xiang’s student.  However, the [frame] (拳架) of teacher Li’s movements differ greatly from the postures shown in the book.  It primarily lacked Jin Yun Ting’s [left-right expanding] (左右撐開) and [top-down wrapping]?? (上下兜裹) [Heng jin] (橫勁).  Teacher Li said originally Tang Wei Lu also taught this type of Heng jin.  Tang Wei Lu once said, “If you’re competing in arm-banging against another person, and you turn your arm when he strikes straight, he would cry out in pain.”  This corresponds to the principles of physics, because this is no longer a collision.  It’s a parabolic strike against the opponent’s arm.  Once you’re capable of using this parabolic curve, the whole body is a fist.  This parabolic curve that covers the entire body is Xingyi’s Heng jin.  Regarding this point, Jin Yun Ting’s photos are textbook examples.  An experienced person can tell he has kung fu by a simple glance.  Of the five elements, [Heng quan] (橫拳) is the hardest one to learn.  Tang Wei Lu had Li Zhong Xuan try to grasp the feel of it by practicing Zuan quan (鑽拳) and the [snake form] (蛇形) and Li Zhong Xuan was gradually able to perform Heng quan.  It in turn led to understanding of Xingyi’s close-range shoulder, hip, elbow, and knee strikes.  Afterwards when learning the twelve (animal) forms, the essence of the forms can be understood without instructions.  Learning of high-level martial arts must follow orders, these sequences are the path to [developing new knowledge based on existing knowledge] (一通百通).  According to Tang Wei Lu, Xue Dian normally trains the [monkey form] (猴形), he can change his movements at an unbelievable level.  He could interchange [fighting methods] (打法) for hands, feet, shoulders, and hips.  This incredible skill could only be obtained after thoroughly mastering Heng jin.  From this one could see that Heng jin is the foundation for delving deeply into the Xingyi system, as stated in the Xingyi classic, “Five elements are the mother of Xingyi and Heng is the mother of the five elements.”

When teacher Li started learning from Shang Yun Xiang, the first thing Shang Yun Xiang made him change was the Heng jin in his body.  He had to [limit] (收斂, I guess to make more subtle) the amount of [expansion and wrapping]?? (撐兜滾裹, this requires better Xingyi understanding to translate properly) and just trained simple back and forth stepping and extension and retraction of the hands.  Further, he had to turn his ankles awkwardly open by 180 degrees, which felt as if being stuffed in a pocket, impossible to exert jin in any part of the body.  If he tries to use jin he would end up falling, let alone standing upright with a straight back.  After training with Shang Yun Xiang for a while, his whole body felt awkward and every movement became difficult, like a kid having to relearn how to walk.  Gradually his walking posture changed to become very soft and lazy, very much like Shang Yun Xiang.  At this point, [training the forms]?? (行拳) felt very empty, loose and natural.  This difference between the frame taught by teacher Li and the Illustrated Canon of Xingyi Five Elements may be due to Shang Yun Xiang emphasizing different aspects of training based on the individual student’s foundations.

At the time the five elements and twelve forms of Xing are all published and openly taught in martial art studios.  What is individually taught in secret is the Bear-eagle combination form, which is said to be the most ancient posture of Xingyi, and even the five elements arose out of it.  Tang Wei Lu had taught it to Li Zhong Xuan before as a [joint-locking] (擒拿) movement where the two hands move over large distances, but Li Zhong Xuan practiced it for a long time without fully understanding it.  As such Shang Yun Xiang decided to teach it to Li Zhong Xuan, but soon as he demonstrated it Li Zhong Xuan noticed it was no different from Pi quan.  Shang Yun Xiang explained, “Pi quan is about rising and falling.  Using the trunk of the body to execute Pi quan is doing the Bear-eagle combination form.”  He then proceeded to walk a lap in the courtyard with his hands down at his sides without any obvious rising and falling.  Shang Yun Xiang then said, “You not only have to use the trunk of the body, you have to use the insides of the trunk to do Pi quan.”  Teacher Li reminisced his past training and had the deepest impression for the statement by Shang Yun Xiang, “Train kung, don’t train fists.”?? (要練功，不要練拳).  When Li Zhong Xuan was saying goodbye to Shang Yun Xiang prior to looking for a job in Shanghai, he told Shang Yun Xiang that he might not have time to train anymore once it gets busy, and training in a crowded area would be very inconvenient.  Shang Yun Xiang advised to him, “You must learn to train in your head, so when you gesticulate a bit when you’re free, you will still develop kung fu.”

Teacher Li worked as a night security guard for a shop in Xidan in his later years.  In the winter of 1998, because the coal furnace in the shop was leaking, he was poisoned by the gas.  At one point he was completely paralyzed and was unable to speak, and he was diagnosed with cerebral atrophy.  He was sent back to the old house at [Mentougou] (門頭溝) to await death.  However, after fourth months he was able to leave the bed and walk, and his speech and mind became clear again, though his constitution was obviously weakened.  It was still a miracle for a 72 year-old man to have such recovery ability.  Teacher Li said he had to thank his [masters] (師父) Shang Yun Xiang and Tang Wei Lu for giving him such a strong physical foundation when he was young.  I went to see teacher Li as soon as he was able to leave his bed.  He told me that though Shang Yun Xiang never showed his [sword skills] (劍法) outside, he was actually well-versed in it.  Sometimes he used the sword to teach bare-hand movements, because if you get stuck (mentally) in your bare-hand training, you cannot continue beyond a certain point.  Shang Yun Xiang would then let the student find understanding through the [sword methods] (劍法).  To illustrate this point, teacher Li stood by supporting himself against the table and had me attempt to stab him with a chopstick.  No matter what direction I used to thrust at him, he was always able to tap my wrist with the chopstick in his hand.  As it went on I forgot he was a patient and thrust faster and faster, but regardless of my speed he was still able to strike my wrist while moving at slow speeds.  I asked him how he was able to defeat fast movements with slow movements and he explained it was achieved by following the Xingyi principle to [take the center gate/road] (走中門、佔中路).

I only learned martial art from teacher Li for a year and had not even finished learning the twelve forms.  Later, as he predicted, my passion for martial art dwindled and I used job training as an excuse and neglected it.  I am trying my best to introduce Shang Yun Xiang’s teaching methods, though it is only bits and pieces of Shang style Xingyi.  Teacher Li is 85 today and may pass away at any time.  I wish he would take on a real martial art student and retain a piece of the martial heritage that is Shang style Xingyi.

Posted by Owen_Schilling at 5:59 AM