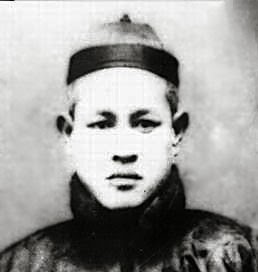 Cheng Tinghua was Dong Haichuan's other top student. He was from Cheng Village in Ji County, Hebei Province. Later he moved Beijing, where he opened an eyeglasses shop located next to the Fire Spirit Temple on Sishuai Street in the Flower Market Plaza. Therefore, he was called Eyeglasses Cheng or Spectacles Cheng.

As a youth, Cheng was fond of martial arts. He was best at Shuaijiao and was famous for his throwing skills. He was a friend of Yin Fu and Shi Jidong. He listened to the two men speak of Dong Haichuan's extraordinary martial skill and was enthralled by the stories. They recommended that he ask Dong to teach him. He was 28 years old at that time.

Cheng was accepted and studied with Dong for about half a year. Dong eventually notice Cheng's talents and intelligence. He took a personal interest in Cheng because of Cheng's diligence and pure heart. Cheng studied Baguazhang with Dong Haichuan for many years and achieved a high level of skill. It was not long before Cheng had all of the Baguazhang secrets. It is said that those that came to Dong's school to challenge him would first have to test their skill against Cheng. Cheng was skilled in turning an attacker's energy against himself. Cheng would simply stretch out his hand and the challenger would be thrown. With Dong's permission, he developed his own school, which became famous throughout the country.

Cheng had an impulsive nature. He was short, but strong. In all his fights, he was particularly fond of using single pounding palm and was always successful in throwing his opponents in a single movement. In contrast to Yin Fu, who popularized the ox tongue palm, Cheng was known for his dragon claw palm. He also mixed his art with Xingyi and achieved great things. Thus Cheng style is somewhat like Xingyi, the palm is shaped like a Xingyi palm and the steps sink firmly and strongly.

Legend says that he wore at ten pound vest of iron. To the end of his days, in practicing his skills or running his business, he never remove his vest, and matter how hot or cold it was. When practicing one form of striking palm, he used a basket of sand weighing 300 pounds hanging from a beam. He practiced striking it night and day. Many boxing masters were amazed at Cheng's strength and skill. He had a tub of water strung on a rope and he would use one palm to lift it up and down 10 times. Then, still holding up the tub, he would circle around three times. The water was never spilled. Cheng never ran out of breath, and his face never got red.

Cheng's reputation was heralded far and wide. It constantly made men jealous, but ordinary men couldn't compare. One day a husky fellow arrived to see Cheng. He said, his strength was incomparable and wanted to contest with Cheng. Cheng out his right arm and said, "If you can lift my arm, I will admit defeat." The fellow used his shoulder to try and raise Cheng's arm. He used his utmost strength but didn't raise it a fraction of an inch. Cheng slightly dropped his elbow and the fellow was dumped on the ground. He lay gasping for quite a while before rising and leaving.

Cheng associated with Xingyi Quan masters. The famous Xingyi master Guo Yunshen was from Ji County like Cheng, and they were familiar one another. When Guo visited the Capitol, he stayed a time with the Cheng family. Cheng asked Guo why he had come. Guo replied that he had heard of Dong Haichuan's skill and he had come to challenge him. Once Cheng knew of Guo's purpose he said, "We are from the county, and have a good relationship with each other. I will be honest with you. I don't think you should go see Master Dong. It will be damaging to your reputation. Dong likes to fight. Ten thousand men have lost to him. How can you hope to win? My humble opinion is that you don't go see him." Guo listened to Cheng and pondered his words as he drank his tea. Suddenly Guo faced Cheng and said, "Brother, how about it you suffer my beng quan?" That was all the notification Cheng got that the punch was coming. Cheng evaded the punch and Guo's incoming fist struck the door frame, knocking a piece from it. (Bagua master Li Ziming attests to seeing this door frame after it had been repaired.) Guo stayed with Cheng a few more days and then returned to Ji County.

Another time, Cheng was walking along a road outide Beijing's Sui Wen gate. It was late at night. Suddenly he heard footsteps approaching rapidly from the rear. He quickly evaded as a man with a saber tried to split his back. Cheng twisted his body and the saber met emptiness. Cheng seized the saber and with one kick sent the man sprawling. He said, "My friend, there are many martial arts and many skills. When you are ready, you may try me again."

There was a man from Shandong named Li Yong'gui. He was six feet tall and each arm had the strength of 100 pounds. He had iron palm training and his gongfu was very strong. He carried a single saber in a sheath across his back. He came to Cheng's home and called out, "Is this Eyeglasses Cheng's home? Where is Eyeglasses Cheng?" Master Cheng came to the door and asked what he wanted. Li said that he had come from Shandong to see Cheng. Cheng told him that he was Cheng Tinghua's younger brother and that Cheng was out visiting friends. Li was acting rudely. He wolfed down the cakes and dumplings Cheng served him and when Cheng asked him if he had had enough, he only said, "It was not too bad." Li then went outside. Cheng sent a student to see what Li was doing. The student saw Li suddenly seize a stone hitching post and break it apart. The student quickly went to tell Cheng. Master Cheng thought that Li had come a long way to compare skills and was not likely to go away. He also wondered if Li might want to be his student. Cheng went to Li and said, "No one knows when Master Cheng will be back, but I have practiced a long time. Why don't we compare out skills?" Li replied, "That is a good idea. However, if my strike knocks you down, I will continue to look for Eyeglasses Cheng." The two men went out into the courtyard. They assumed their stances and did two or three moves. Master Cheng put his palm on Li's upper hip and Li was thrown six feet. Then, while still on the ground, Li tried a move called 'Hungry Tiger Seizes Food' only Cheng dodged the blow and again struck Li to the ground. Li rolled over, opened his eyes and said, "You said you were Eyeglasses Cheng's student but I think you are Eyeglasses Cheng himself. Why are you so unfair to me?" Li then knelt down and asked to study Baguazhang with Master Cheng. Following this event he lived in the Cheng household. Many months later, Cheng said to Li, "Let us talk. You came to learn my art and I welcomed you. However your appetite is too big. I cannot stand it. You had best return to your home and practice there." Li heard this and laughed for now he was able to leave Cheng Tinghua without bad feelings.

During the Boxer Rebellion (July 1900) Cheng was in Beijing. He saw the invading armies come in killing and looting. He swore to defend his country from the invaders. One day the invading armies were killing indiscriminately.  A German army company had orders to kill the Yihe Guard, but proceeded to kill the common people because the Yihe members wouldn't fight. They proceeded to plunder and burn everywhere. When Cheng saw this his heart was filled with righteous indignation. In the middle of the night he approached a German patrol alone and attacked, killing many. The officers were furious and ordered the soldiers to surround Cheng. Cheng used his piercing palm to evade them but was shot and killed as he leapt over a wall.

Posted by Owen_Schilling at 5:13 AM