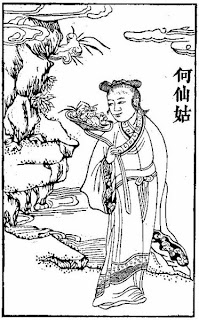 Immortal Woman He or He Xiangu 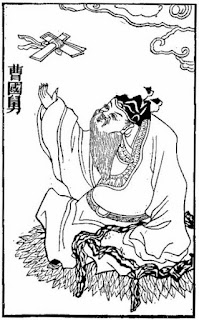 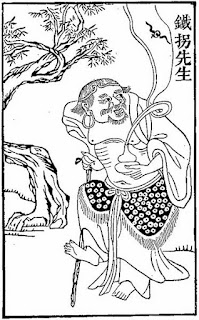 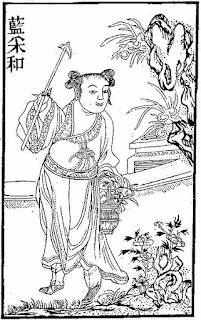 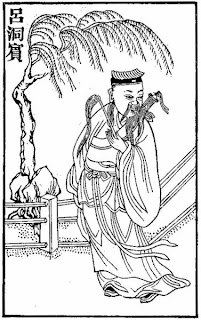 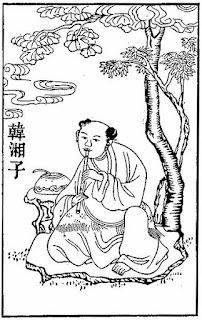 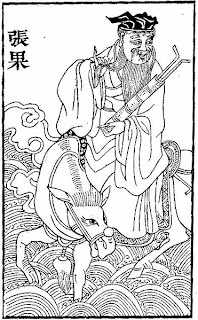 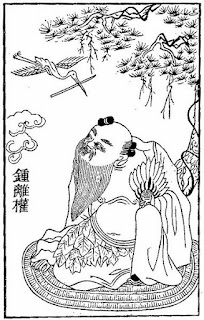 A brief biography of the Eight Immortals

1. Immortal Woman He or He Xiangu is the only female deity among the Eight Immortals. She was from Yong Prefecture in Tang Dynasty, or from a wealthy and generous family in Zēngchéng County.

At birth she had six long hairs on the crown of her head. When she was about 14 or 15, a divine personage appeared to her in a dream and instructed her to eat powdered mica, in order that her body might become etherealized and immune from death. So she swallowed it, and also vowed to remain a virgin.

2. Royal Uncle Cao was said to be the uncle of the Emperor of the Song Dynasty, being the younger brother of Empress Dowager Cao.

Cao Guojiu’s younger brother Cao Jingzhi  was a bully, but no one dared to prosecute him because of his powerful connections, not even after he killed a person. Royal Uncle Cao was so overwhelmed by sadness and shame on his brother that he resigned his office and left home.

3. Iron-Crutch Li  is sometimes said to be the most ancient and popular of the Eight Immortals of the Taoist pantheon. The legend says that Iron-crutch Li was born during the Yuan Dynasty period (1279–1368), and was originally named “Li Yüan”.

He is sometimes described as irascible and ill-tempered, but also benevolent to the poor, sick and the needy, whose suffering he alleviates with special medicine from his gourd.
He is often portrayed as an ugly old man with dirty face, scraggy beard, and messy hair held by a golden band. He walks with the aid of an iron crutch (t’ieh kuai) and often has a gourd slung over his shoulder or held in his hand.
He often is depicted as a clown figure who descends to earth in the form of a beggar who uses his power to fight for the oppressed and needy.

4. Lan Caihe  is the least defined of the Eight Immortals. Lan Caihe’s age and sex are unknown and Lan Caihe is usually depicted in sexually ambiguous clothing, but is often shown as a young boy or girl carrying a bamboo flower basket.

Stories of Lan’s behaviour are often bizarrely eccentric.
Lan is often described as carrying a pair of bamboo castanets which they would clap and make a beat with by hitting the ground, they would then sing to this beat and a group of onlookers would follow and watch in amazement and entertain themselves. After these performances they would give them lots of money as they asked for it, Lan Cai. They would then string this cash and coins on a long string of money that they carried. As they walked the coins would fall off and Lan Cai. They would not care, other beggars would then take the money.
Like all the other immortals they were often said to be in a drunken stupor and left this world by flying on a heavenly swan or crane into heaven. One day while in a tavern, they had supposedly gotten up to go to the bathroom. But before leaving they flew off on the crane or swan and stripped off their clothes on the way up.

5. Lǚ Dòngbīn is a historical figure and also a deity/Immortal revered by many in the Chinese culture sphere, especially by Daoists/Taoists. Lǚ Dòngbīn is one of the most widely known of the group of deities known as the Eight Immortals and considered by some to be the de facto leader. He is also a historical figure who was mentioned in the official history book “History of Song”.

Lü Dongbin is usually portrayed as a scholarly, clever man with a genuine desire to help people obtain wisdom/enlightenment and to learn the Tao. However, he is often portrayed as having some character “flaws”, not an uncommon theme for the colorful Taoist immortals, all of whom in general have various eccentricities
He is said to be a ladies man, even after (or only after) becoming an immortal - and for this reason he is generally not invoked by people with romantic problems. This may also relate to some of the Taoist sexual arts.
He is portrayed as having bouts of drunkenness, which was not uncommon among the often fun-loving Eight Immortals. This also parallels several Taoist artists renowned for their love of drinking.
One story relates that early on after becoming immortal, he had a strong temper as a “young” Immortal, even deforming a riverbank in a bout of anger.

6. Philosopher Han Xiang, one of the Eight Immortals, was born Han Xiang during the Tang Dynasty.

He is said to be the nephew or grandnephew of Han Yu, a prominent statesman of Tang Court. Han Xiang studied Daoism under Lü Dongbin.
Once at a banquet by Han Yu, Han Xiang tried to persuade Han Yu to give up a life of officialdom and to study magic with him. But Han Yu was adamant that Han Xiang should dedicate his life to Confucianism instead of Daoism, so Han Xiang demonstrated the power of the Dao by pouring out cup after cup of wine from the gourd without end.
Because his flute gives life, Han became a protector of flautists.

Zhang Guo Lao was known for wandering between the Fen River & Chin territories during his lifetime and was known to travel at least a thousand li per day upon a white donkey or mule.When his journey was finished, he folded his mule up and placed it in his pocket or a small box. When he wished to use the mule again, he poured water on it from his mouth and the mule regained its form.
Emperors of the T’ang dynasty (T’ai Tsung and Kao Tsung) often invited Zhang Guo Lao to court, but he always declined these invitations. Once, when asked by Empress Wu, he finally agreed to leave his hermitage. As he reached the gate of the Temple of the Jealous Woman, he died suddenly. His body was seen decomposing and being consumed by worms, but he was later seen, alive and well, on the mountains of Heng Chou in P’ing-yang Fu.

8. Zhongli Quan is one of the most ancient of the Eight Immortals. He is also known as Zhongli of Han  because he was said to be born during the Han Dynasty. He possesses a fan which has the magical ability of reviving the dead.

Born in Yantai Zhongli Quan was once a general serving in the army of the Han Dynasty.
According to legends, bright beams of light filled the labour room during his birth. After birth he did not stop crying until seven full days had passed. Later Taoists celebrate his birthday on the fifteenth day of the fourth month of the Chinese Calendar.
In Taoism, he is known as the True-Yang Ancestor-Master. He is also called “Master of the Cloud-Chamber”  in accounts describing his encounter with Lü Dongbin before achieving immortality.


Reblogged from : HERE
Posted by Owen_Schilling at 7:12 AM