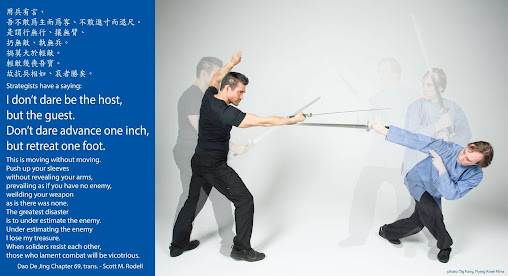 Strategists have a saying:
I don’t dare be the host, but the guest.
Don’t dare advance one inch, but retreat one foot.
This is moving without moving.
Push up your sleeves without revealing your arms,
prevailing as if you have no enemy,
wielding your weapon as is there was none.
The greatest disaster is to under estimate the enemy.
Under estimating the enemy I lose my treasure.
When soliders resist each other, those who lament combat will be victorious.

Commentary and Notes- Daoist thought has had a strong effect on almost every aspect of Chinese life, including combat and strategy. In this chapter, Laozi speaks of being the guest instead of the host, codifying one of the basic approaches to strategy in jianfa. When one is the host, one acts first, arranges things, demonstrating one’s intent by way things have been organized. The host does all the work then invites the guest in. From the swordman’s point of view, this presents a great deal of information about one’s plan of action and skill set. On the other hand, when one is the guest, one follows the action without interjecting one’s own plan. In this way, the swordsman can know his opponent while keeping that duifang in the dark about one’s own strengths and weaknesses. This is action or movement without there being action. This means that instead of expending energy on a plan of action, one waits and listens, allowing the duifang to expose his or her intent. Then, with this clear insight, applies the correct counters to defeat the duifang’s strategy. In this way, without having taken any action of one’s own, one can prevail. This does not mean surrendering control of the action to the duifang. Rather it means controlling the action by allowing the duifang to tell you his or her plan.

“Push up your sleeves without revealing your arms,” is a specific example of what the first line alludes to. Preparing to engage a duifang, one would commonly push the long flowing sleeves of Chinese garments up out of the way as the hands are raised to a useful position. But in doing so, one should not show any aggressive intent, or indeed any intent at all. Sunzi similarly suggests one -

While the Taijiquan Lun records, that by hiding one’s intent, “He (the enemy) can not know me, I alone comprehend him. Where ever a hero goes he has no enemies, this is because he has achieved these skills.\.” 人不知我, 我獨知人. 英雄所向無敵, 蓋皆由此而及也.

The notion of emptiness expressed as “wielding your weapon as is there was none,” is a common one found in jianfa. It brings to mind Huang Yuanxiu, (黃元秀),”Song of Empty Mind” from his Fundamentals of the Wudang Sword Method:

The song says
With palm empty, the sword is lively.
With the center of the foot empty, the footwork is nimble.
With the topknot empty, the entire body is one.
歌曰。
手心空。使劍活。
足心空。行步捷。
頂心空。身眼一。

The central idea in Huang’s “Song” is that by being free of any predisposition, one’s movements as lively and adaptive, so that one is able to respond exactly as needed.

*I usually prefer to translate myself any lines I reference from a Chinese classic, but honestly, I just couldn’t translate make any significant improvement over that already offered by Thomas Clearly when it came to this line.
— with Scott M. Rodell
Posted by Owen_Schilling at 7:35 AM

Email ThisBlogThis!Share to TwitterShare to FacebookShare to Pinterest
Labels: Dao De Jing Chapter 69 - Strategists have a saying...trans by Scott Rodell