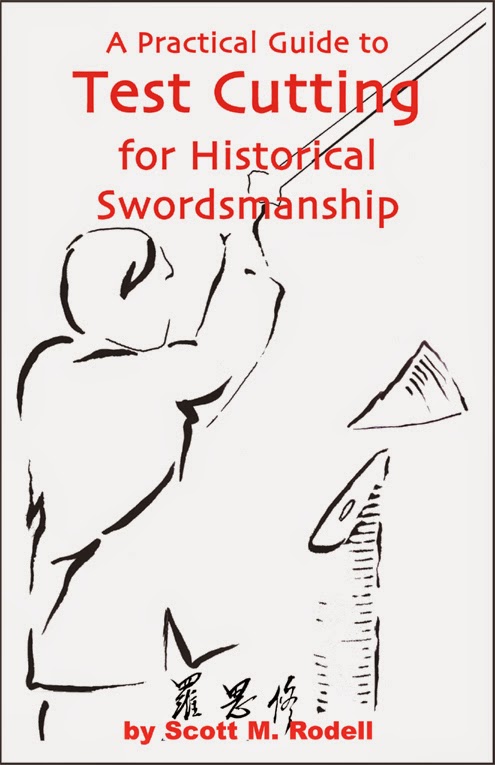 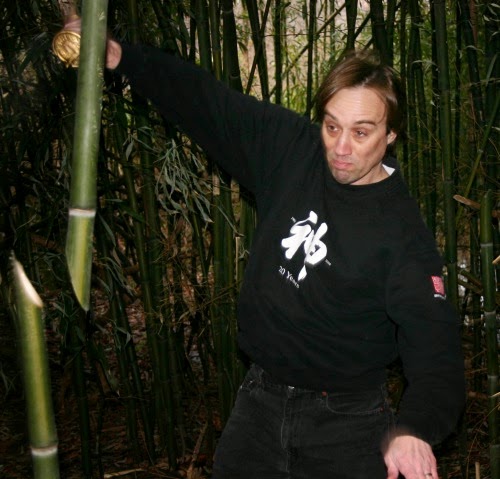 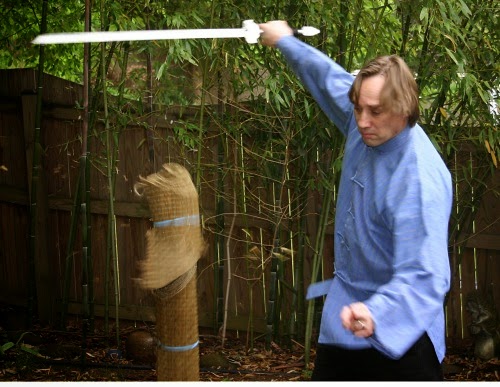 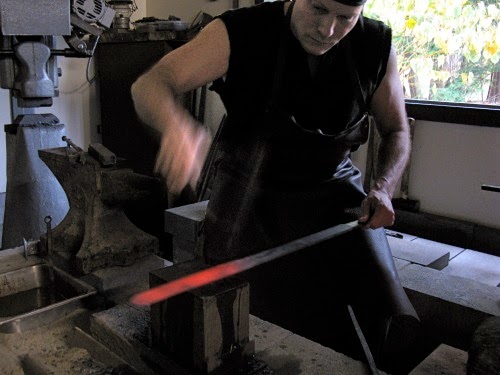 Generally speaking, the dao (Chinese saber), evolved into primarily a military weapon, while the jian (double edged straight sword) became a weapon of the skilled swordsman with a focus more on what we might call individual dueling. In a functional or more technical sense, this has meant that daofa (saber swordsmanship) has tended to toward more powerful cuts. The simple reason for this is military men fought in battles. Knowing ahead of time that they were to be in combat, they wore armor. Thus the need for heavier cuts. So when practicing with a saber, I generally cut tougher, thicker targets.

Here is one example, a shan (fanning) cut - https://www.facebook.com/video.php?v=10201445094755702&set=vb.95815572075&type=3&theater
The target in this case, a bamboo stalk wrapped in a single mat, simulates a cut to the neck. Note that in daofa, by employing a heavy, powerful cut, one often over carries past the target (something one should not do with a jian in hand). Keep in mind that when cutting in a “military” fashion, not only would your duifang be armored, but so would you. That means that one is generally protected from quick, short energy counter-cuts that would be serious if one was dressed in daily wear clothes.

There is a popular misconception that jian can not be employed to deliver powerful cuts. Cuts I demonstrated in the video posted above clearly demonstrate the fallacy of this thesis (http://www.grtc.org/resources/videos/test-cutting-chinese-swordsmanship/). Well trained hands, can, deliver liao cuts that could completely sever a leg. This is just one example of a powerful jian cut. But while jianfa (straight sword method) covers a wide variety of cuts, from the powerful to the quick, the focus of jianfa is generally speed and precision. The reason for this is that unlike the soldier, the average person is not armored during combat. A quick cut that severs a ligament or vital artery need not necessarily rend a limb of cut deep. For example, a quick pi cut to the top of the forearm can sever the ligaments that control the thumb, leaving one’s duifang unable to hold a weapon. Such a cut is not only quicker and powerful enough to do the job, but easier to recover or continue from if the target is missed or the cut neutralized. So when I am practicing jian cuts I tend to work on these sort of quick, precise cuts, and multiple cut with quick changes, always working to keep the movements as small as possible without sacrificing power. Here’s is an example of what I am speaking about - https://www.youtube.com/watch?v=jh6ri2aGarQ

There is another category of cutting with a dao that my good friend Paul Champagne described to me. As discussed above, soldiers worn armor. That meant that there was actually often little cutting going on. Obviously, the whole reason from wearing armor was to prevent being cut, otherwise, while wear the heavy stuff, it is terribly hot and that saps one’s strength and causes over heating.

Paul spoke of “cutting” wear one delivered a sharp, blow that broke bones thru armor. The target he described for practicing this is made of hardwood sticks wrapped inside a thick roll of rice straw mats. This bundle is then wrapped in cloth. This can be hung from a tree limb and then is struck with a blow that focused not on cutting the surface but to deliver shock inside to break the stick. One can see this kind of cutting in the Yang Shi Taiji Dao form and it is the reason why the sui bu (following step) is essential to the form. (Curiously, most contemporary practitioners of this common form leave out the sui bu).

One can also practice striking cinder blocks with a snapping blow that breaks the block as a prelude to cutting the target I described above. Unfortunately, I have yet to practice this myself. I need a roughed up dao that won’t be further damaged by “cutting” cinder blocks.

Attach photo is of my old friend, Swordsmith Paul Champagne, may he happily forging away in the heaven.

Found: HERE
Posted by Owen_Schilling at 6:08 AM