The Knights of Kung Fu

Here is another word I would like to add to our martial vocabulary: Wu Xia (Wu Hsia). This translates pretty well into the English term, Knight-errant. Wu of course comes from the word for “martial” as in Wushu (martial arts). Hsia is a Chinese word composed of the characters for person and “in the middle”, somewhat like the term Ronin in Japanese.

Like a Knight of the Round Table, the Wu Xia (Shee-Ah) was a real figure following a creed of altruism, disdain for money, justice, individual freedom and loyalty. Up until the Qing dynasty, these Kung Fu Knights made a real presence in China, supplying an iconic figure in the Chinese consciousness. For centuries these brave men were hired to protect and advise those in need. This became a heroic image in the Chinese mind and only started to dispel with the rise of insurance companies and the Pao Chu (Body Guards). Many of the latter came from the Wu Xia, but now they were absorbed into the “system” and lost their reputations as lone wolves. 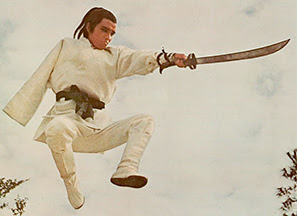 We still watch them today, flying through the air with their swords held out like banners, striking their poses, running across the rooftops. In Iron Monkey, Crouching Dragon, Emperor and the Assassin and hundreds of others films we thrill to the exploits of these colorful knights. They represent that part of us we feel we are refining by bringing the awareness we find in martial practice. Think about it: many millions of practitioners all feel worth here, despite the media continually misunderstanding the importance of the art. The idea itself if no more exclusively Chinese than breathing. It is the archetype of the hero, the trickster and the magician. However differently it may dress from culture to culture, it remains real and inspiring.

Here is a translation of a Chinese poem.

Song of the Eastern Gate by Lu Yu

Don’t you see
The man from the Eastern Gate has the spirit of Hou Ying;
He killed someone in broad daylight in the dusty market-place,
The Metropolitan Prefect knew his name but dared not arrest him,
While he leant his sword against the sky on Mount K’ung-T’ung.
He made friends with three or four like-minded men,
Together they rode freely on their piebald horses,
Looking up to heaven, he laughed and made light of all things,
Then went into his house and received guests no more.
Yet his line prospered and his descendants became officials at court,
Ah!

From The Chinese Knight-Errant by James J. Y. Lu

Most of us are not jumping over walls or spinning staves so fast we fly like helicopters, at least not yet. But with a little practice…
Posted by Owen_Schilling at 8:04 AM