Posted by Owen_Schilling at 10:40 PM No comments:

Posted by Owen_Schilling at 1:49 AM No comments:

Sorry For the Lack Of Posts

I have been on Vacation! I will bw back and posting this weekend :)
Posted by Owen_Schilling at 1:41 AM No comments:

Posted by Owen_Schilling at 6:14 AM No comments:

(BT VINTAGE FOOTAGE) "2003"
"The first All Ba Gua Zhang Tournament" A gathering of Ba Gua Zhang practitioners from the United States and Canada compete in a all out Ba Gua Zhang competition comparing they skills ranging from Ba Gua Solo routines, BaGua weapons forms, BaGua Push Hands, and Free Fighting. This video contains film footage of the third All BaGua Tournament which was hosted on September /27/2003 created & organized by Sifu Hill & Novell Bell A.K.A. Black Taoist."
Posted by Owen_Schilling at 4:25 AM No comments:

Posted by Owen_Schilling at 4:52 AM No comments:

Chinese mind body boxing by robert w smith   on Slide Share
Posted by Owen_Schilling at 7:23 AM No comments:

TIM CARTMELL – True to the Original Directive by AWMA BLOG

When I first drove to Tim Cartmell’s Shen Wu school in Garden Grove I really didn’t know what to expect. I had heard of Tim through a martial arts internet board, Emptyflower.com and there was a general consensus amongst the members that he was the man to see in California if you were looking for the Chinese Internal Martial Arts. This was back in 2004.

California freeways can be anything but free at certain times. That particular day, they were a parking lot. I gave myself an hour and a half to get there from LA and it took nearly all of that.
The school was in the back of a strip mall. All other stores were closed at that hour. It was kind of eerie actually. I remember thinking: “Hell, this better be good.”

The only two other people in the lot were a couple of guys loading what appeared to be an endless amount of shady boxes into the back of a van.

I had lived in LA all of two months. The soundtrack from the movie Boyz in the Hood seemed to be coming out of my radio.

I was looking for a good Ba Gua teacher. About a year before I had become enamored with the art through Kumar Franzis’ book The Power of Internal Martial Arts.

I had dreams of vanquishing opponents with my chi. I was in for a rude awakening.
Tim got there a few minutes before class. The small group of students that had gathered went into the studio and soon we were warming up. Everything was done very simply, without ceremony.

What followed was the complete destruction of what I had previously considered to be true martial art. I had been training already back then for 20+ years. But I was not prepared for the display of practical, no-nonsense knowledge that ensued.

The class literally floored me.

Tim gave no lectures about chi or the gathering of energy or anything like that. What we got was practical applications, one after the other, delivered with clear precision and superior understanding.

I “was convinced” I had trained hard in many classes before this one. I just didn’t know what training hard was. It wasn’t just an ignorance of the endurance and physical requirements. It was a revelation as to what it really took to be effective.

Some teachers can talk themselves silly about power and martial application. Tim, in truth, didn’t talk much. He showed.

He threw guys twice his size with little effort. He maneuvered around them, took them down, and made them tap in seconds. He was able to apply his skills and leverage with superior effectiveness on dudes that looked like they could lift Buicks. It was uncanny.

The martial arts are designed to allow a smaller person to be able to defeat or at least have a chance against a larger opponent. That’s their “original directive.” Tim is the embodiment of that purpose.

It’s been a while since I’ve trained with Tim. We talked recently about his career, the “original objective” of the martial arts, and his plans for the future. “I actually started practicing TKD and Hapkido when I was 10,” Tim said to me. “A couple years later, I visited a Kung Fu San Soo school and liked the way they trained, it was all about self-defense techniques and most of the time was spent drilling the techniques with a partner.  Even at a young age, what I was really interested in was developing some practical fighting skills.”

San Soo is a non sportive, purely fighting martial art. Tim quickly realized that there was a limit to how fast and strong he could become. Plus those attributes decline with age.

He started searching for something that could even the odds.
“I had read a lot about the Internal styles and became very interested in the idea of using ‘soft’ skills to overcome opponents that were stronger.  My idea was that all true ‘martial arts’ must have started with a similar premise.”

This idea of a premise is marvelous. The soft overcomes the hard, so that physical strength is not the defining factor, but your skill. Let me just say that again: Strength doesn’t win, skill does. This is why I got into martial arts in the first place. This is humans reversing the laws of nature. Is what separates us from the other animals, the pinnacle of homo sapiens’ physical ability.

Tim has dedicated his life to the improvement of his skill. When he couldn’t find the right teachers here in the states he decided to go to the source. He didn’t know anybody in Taiwan. He couldn’t speak the language. But he had a dream and the determination to make it happen.
“After finishing university in the States I decided to go to Taiwan. In the early 80′s travel and study in Mainland China wasn’t so easy. But Taiwan had many fine teachers that had left the Mainland after the war. I enrolled in the Chinese language program at the Taipei Normal University and I spent quite a bit of time looking for teachers and was very fortunate to find several that were not only top rate martial artists, but also very accepting of me as a foreign student.”

The list alone is mindboggling. Tim spent eleven years in China.
Soon he discovered that good martial art is simply good martial art. All this hoopla about labels is just convenient. When fighting styles are practiced the way they’re supposed to, they all exhibit the same principles. They have to. They’re designed to improve the capabilities of the human body and the human body is only designed one way.

“The label ‘Internal Martial Arts’ is fairly recent, about 100 years old.  It has come to refer to specific styles that adhere to similar principles. In actuality, there is no ‘Internal/External’ dichotomy, nor even separate ‘styles’, there are only individuals moving and fighting.  Labeling movement and fighting skills as ‘styles’ is just a convenient way of organizing types of training and technique.”
This goes against what a lot of martial art schools preach, that their style is inherently superior and the only true way. That’s nonsense. It’s a marketing ploy.

There’s only individuals moving and fighting.  Fighting being the practical way in which to measure skill. It’s an essential part of the process.

Tim has an impressive competition record, from full-contact tournaments in Taiwan to grappling tournaments here in the US. I asked him if he thought competition was a necessary part of the learning process.

“I fought in several Sanda competitions in Taiwan. I felt it was the best way to test my skill level and mental state in a realistic venue. I did well, but after every fight I learned valuable lessons.  Since being back and practicing Brazilian Jiu Jitsu, I started competing as a white belt and continued competing at every level into black belt. My grappling competitions were for exactly the same reason.”

Tim credits this type of training with his ability to train fighters.

“Now that I coach grapplers and professional MMA fighters, I realize I wouldn’t have the skills necessary to coach at this level if I would have only practiced and never competed. Competition is a great way to learn about yourself, your strengths and weaknesses, and your character as a human being.  I’ve found that a five minute round in the ring or on the mats will often teach you more about yourself than a lifetime of solo forms or cooperative, non full-contact training.”

When Tim came back from China, Brazilian Jiu Jitsu was waiting “I was back from Taiwan to teach seminars in late 1993.  I heard about, at the time, a relatively unknown family of grapplers that were fighting all comers. I bought the first ‘Gracie in Action’ tape and watched the fights.  I immediately wanted to practice Jiu Jitsu.”

It turned out to be the thing he’d been looking for.

“I had been on the ground a couple times in actual fights, and already understood the absolute importance of learning practical ground fighting skills. The Chinese martial arts are virtually devoid of ground fighting practices, so I saw BJJ as my chance to round out my skills as a martial artist.”
Tim started studying BJJ in 1995 and received his black belt in 2004, the first one his instructor, Cleber Luciano, ever awarded.

Now Tim is the head BJJ and submission grappling instructor at the Ace Jiu Jitsu Academy in Southern California. He also coaches MMA fighters and teaches the Chinese arts in private lessons and at seminars.

When I asked him if there was ever any conflict with training in all these different styles, especially going from the internal arts to Brazilian Jiu Jitsu, this is what he had to say:
“The underlying principle of BJJ is to cultivate the skills necessary to defeat larger and stronger opponents using superior strategy and leverage, the same as Internal Martial Arts. This principle is true to the original directive of all martial arts.”

True to the original directive. Wouldn’t it be great if all martial arts training was like that?


It is rare to find a teacher that can express these complex ideas in such a clear manner and then demonstrate them with ease. That is, in my humble opinion, the true essence of mastery.
Watching Tim do Jiu Jitsu is like watching somebody do Tai Chi on the ground. Like opponents used to say about Jigoro Kano, “It’s like fighting with an empty Jacket.”

Tim has written and translated a number of books. For more information on him, Brazilian Jiu Jitsu and the Chinese Internal Martial Arts, visit www.shenwu.com.

FOUND ON THE AWMW BLOG: HERE
Posted by Owen_Schilling at 7:59 AM No comments:

The Bagua Needles were a specialty of Yin Fu and are mostly passed down within Yin style lineages."
Posted by Owen_Schilling at 9:00 AM No comments:

Posted by Owen_Schilling at 6:53 AM No comments:

Su Dong Chen - Students practicing and sparring
Posted by Owen_Schilling at 4:48 AM No comments: 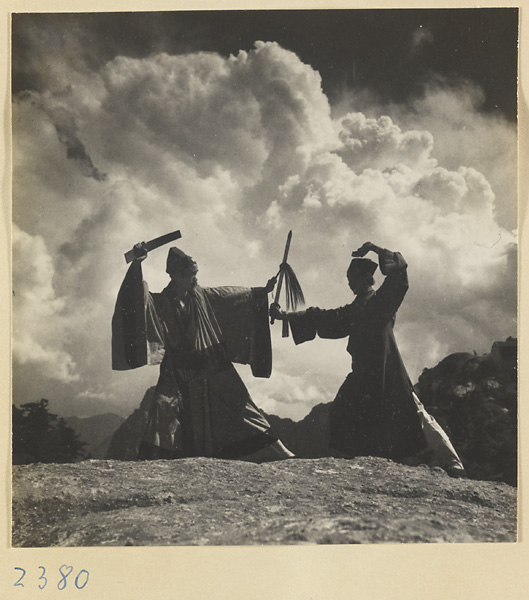 Posted by Owen_Schilling at 8:42 AM No comments:

This modern custom forged Chinese Straight Sword (Jian) was forged with pieces of meteorite in the blade and later fitted with gold fittings!

"Here is the finished meteorite jian with a piece of the smelted meteorite it was made from.

Photo of the handle:

Photo showing the grain of the folds:

Photo of the tip:

Overall shot of sword with scabbard:

Posted by Owen_Schilling at 7:30 AM No comments:

Beginning and Ongoing classes in the Taoist martial arts here in Boulder, Colorado.

Focusing on methods for self cultivation, lasting health and personal transformation.

Posted by Owen_Schilling at 6:46 AM No comments: