"Michael Corradino's 1998 final match, resulting in KO. Michael was trained by yours truly (Mike Patterson) in Xingyi, Bagua and Taiji. Watch to the very end of the clip to see a slow motion closeup of the highlight of the fight."

Posted by Owen_Schilling at 7:00 AM 2 comments:


Posted by Owen_Schilling at 6:51 AM No comments:

The Foundational Trainning Of GM Changs Bao Ding Kuai Jiao » www.videosee.net
Posted by Owen_Schilling at 7:32 AM No comments:

There is a new Discussion Forum for Internal Martial Arts. Posted by Owen_Schilling at 8:21 AM No comments:

Posted by Owen_Schilling at 7:27 AM No comments:


Handmade Portraits: The Sword Maker from Etsy on Vimeo.

Nezha, Na Zha or Nata (Chinese: 哪吒; pinyin: Nézhā or Núozhā[1]; Pe̍h-ōe-jī: Lô-chhia; is a Taoist protection deity, the trickster, originally of Chinese Buddhist mythology. His official Taoist name is "Marshal of the Central Altar" (中壇元帥). He was then given the title "Third Lotus Prince" (莲花三太子) after he became a deity.
Wikipedia


Posted by Owen_Schilling at 5:51 AM No comments: 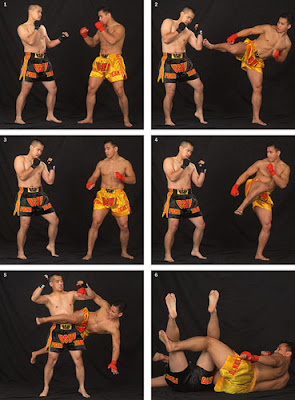 Posted by Owen_Schilling at 7:03 AM No comments:

Posted by Owen_Schilling at 5:37 AM No comments:

Muay Thai Chaiya is a fascinating fighting system deeply rooted in the martial traditions of ancient Thailand. Host, Brooklyn Monk, Antonio Graceffo studies with Kru Lek, one of Thailands leading practitioners of this effective art. Chayia uses a low stance, bare knuckles, elbows and knees out, like a prickly pineapple waiting to impale the opponent when he moves in.


Thanks to Steven for the links!
Posted by Owen_Schilling at 5:40 AM No comments:

Posted by Owen_Schilling at 3:46 AM No comments:

A 1964 cartoon release of the classic Chinese story; Monkey King or Journey to the West with English subs! Enjoy


Posted by Owen_Schilling at 3:02 AM No comments:


Posted by Owen_Schilling at 3:06 AM No comments:

Posted by Owen_Schilling at 6:49 AM No comments:

Posted by Owen_Schilling at 7:33 AM No comments:


Posted by Owen_Schilling at 4:34 AM No comments:

Kuo Yun-Shen's given name was Yu-Sheng. He was born in China's Hebei Province, in a town called Hsi Luo Ma Chuang. He was short in stature, standing only about shoulder-high to most men, but he was strong and healthy by nature. He is said to have been the best disciple to ever have studied under Master Li Luo-Neng. No matter when he fought, using Peng Chuan ("Crushing Fist"; one of the five elemental forms of Hsing-I) and its half-step he could fell any opponent. No-one could stand against his use of P eng Chuan, and he was known throughout the Empire as Ban Bu Peng Kuo; Kuo of the Half-Stepped Crushing-Fist.

Kuo was a violent man who loved to fight. Because of this, he committed not a few violent acts, as we will see below.

In the beginning, he wanted to study Hsing-I, and so went to pay his respects to the famous master Li Luo-Neng in hopes of becoming a student. However, Master Li despised his rough and violent nature, and refused to teach him. But with all his heart he wanted to study Hsing-I. So he disguised himself as a workman to be able to come and go in Master Li's house, and in his spare time practiced what he had seen Master Li teach.

At the time it so happened that Peng Chuan was very popular. So it was that Kuo studied this particular form with the utmost dedication. After diligently studying for three years, he had perfected Peng Chuan.

One day, Kuo again went to pay his respects to LiLuo-Neng, and showed him Peng Chuan as he had been practicing it. His style was in almost all aspects in accord with the principles of Hsing-I. When Master Li saw that his determination and dedication we re so great, he agreed to teach Kuo all of the secrets of Hsing-I.

Among the great masters of Hsing-I, there are more stories about Kuo Yun-Shen than any other. Kuo's strength was without equal. It didn't matter how his opponent attacked; at his first move with Peng Chuan, they would drop to the ground.

It didn't matter how powerful the enemy he faced - he could easily defeat them all. There was a saying among the people: "Under all of Heaven, nothing may prevail against Peng Chuan" Kuo was the embodiment of this saying. Kuo was righteous in actions a nd truthful in speech. His disciples and succeeding generations in general all thought of him with the utmost veneration. In his later years he wrote a book called An Explanation of Hsing-I Chuan. Thanks to this book we have some taste of what kind of man he was.

The following are just a few of the stories concerning him...

According to Master Wang Shu-Jin, one day Kuo Yun-Shen was sparring with a master of another style. In the course of the fight he was too forceful in his use of Peng Chuan; his opponent began to spit blood, and died. Because of this, Kuo was sent to prison.

After three years he was finally released. One of the top students of the Master he had killed came and declared his intention to avenge his teacher's death, inviting Kuo to compete with him. People knew that for the three years he had been in prison, Kuo had been manacled hand and foot, unable to move with much freedom, and so unable to fully practice his art. All thought that his health was probably weakened, and his vehemence doubtless dimi nished from its former state. His opponent was undoubtedly taking advantage of all this to get his revenge.

As soon as they crossed arms, however, Kuo struck violently with both fists, and his opponent was actually thrown back some fifteen to twenty feet and collapsed. It was very obvious that everybody was mistaken in their belief. During the time that he w as in prison, even though Kuo Yun-Shen did not have complete freedom of movement, he thought incessantly about his fighting style; although his hands were chained, borrowing from Hu Hsing Hsing-I's Tiger Form) he was able to come up with a new hand style. Morning and night he developed and practiced his "Tiger Striking Hand".

There exists yet another version of this same story, told in A Biographical Sketch of Master Kuo.

Kuo Yun-Shen was appointed as warden of Shen County. When he went to take over his post, the county magistrate presented him with money and gifts in recognition of his achievements. Because of this he drew the ill-will of the local bandits, who took ev ery opportunity to make trouble for him.

One day, Kuo found himself face-to-face with a sword-brandishing brigand. He easily took the sword from him, and using it to return the attack hacked him to death. The penalty for killing a man was very severe, and Kuo found himself facing this penalty . But the county magistrate was fond of Kuo and so lightened his sentence to only three years imprisonment.

When the day for his release arrived, Magistrate Ch'ien asked, "Have you lost your kung-fu?" Kuo Yun-Shen declared "Absolutely not." His glance happened to fall on the courtyard wall. He struck it with his "Tiger Fist", and with just this one blow, the wall collapsed in a thunderous roar. For the three years that he was in prison, even though manacled, he found a way to practice, and created his "Tiger Fist". For this reason, his fame shines even today.

"Battle with the Shaolin Priest"

In an unnamed temple at the end of Steel Alley in Beijing, there lived a priest whose strength was without equal. It was said that he could lift a stone lion weighing 600 jin. He had wanted very much to study Hsing-I Chuan, but was refused as a student; instead he studied the Shaolin style. His skill was known far and wide. Everyone thought that someone this skillful and powerful would be able to defeat a Hsing-I practitioner with one blow. In order to prove this, the priest went to Beijing.

At that time, Liu Ch'i-Lan's chief student, Li Tsun-I had established a studio in Deck Alley. He accepted the priest's challenge, and was defeated. Thinking of the disgrace this must surely bring to Hsing-I Chuan, he asked Kuo Yun-Shen to face the chal lenge.

Kuo Yun-Shen stepped up and began to demonstrate his Peng Chuan. Advancing with the half-step, he attacked the Shaolin priest. The priest flew back some ten feet and fell at the base of a wall. "Come try again", Kuo said. The priest came forward and Ku o advanced again, adding even more strength and ferocity to his half-step, and again attacked with Peng Chuan. He hit him in the chest so hard that he hurt the ribs in the priest's back, leaving him in such pain that he was unable to stand.

Kuo pulled some medicine from within the folds of his robe, saying "Take this medicine, Priest, and after you apply it rest gently while you heal." He then walked away. The next day, this Shaolin priest prepared lavish gifts and went to pay his respect s to Kuo Yun-Shen, acknowledging him as a teacher.

Later, Kuo Yun-Shen was heard to say, "When I first saw the priest, I could tell that he had potential, was teachable. Because of this, I only used the Chi from my lungs to steal the strength from his; this was curable with medicine. Had I used Chi from my kidneys to sap the strength in his arms, he would have never recovered." The listening crowd all clamored their approval.

At the time, there was a Pa-Kua practitioner named Tung Hai-Chuan, whose skill was renowned. Kuo went to pay his respects to Tung Hai-Chuan, asking that they compare skill in fighting. They fought for three days and three nights without rest, neither g aining a clear advantage over the other. Later, when. talking together, they discovered that there were many similarities in the underlying Theories behind their two respective styles, and so decided to combine both into one school; those who studied Hsin g-I must study Pa-Kua, and those who studied Pa-Kua must study Hsing-I.

About the Author:
Robert Brewer is currently completing his masters degree in Asian Studies. He has studied in both Mainland China and Taiwan. He is an accomplished language teacher and a long time practitioner of the internal arts, with an emphasis on Hsing I Chuan.

From www.hsing-i.com
Posted by Owen_Schilling at 7:43 AM No comments:


Posted by Owen_Schilling at 8:19 AM No comments:

An example of the Yi Zong Ba Shi- I will be teaching this in January. Enjoy

Posted by Owen_Schilling at 7:14 AM No comments: