World Judo Championships Budapest 2017
Posted by Owen_Schilling at 3:59 AM No comments: 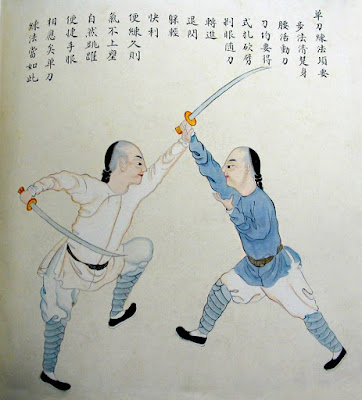 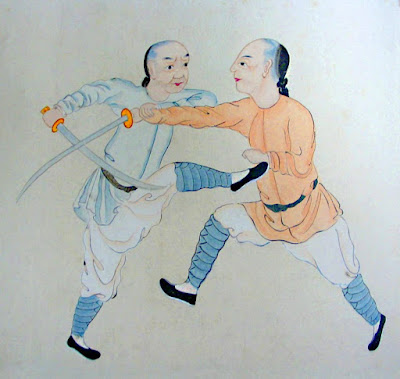 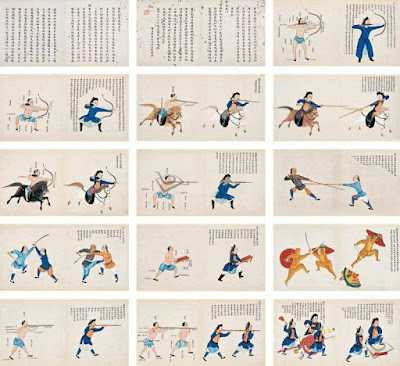 Chinese Single Saber (dao, 單刀)
Posted by Owen_Schilling at 4:37 AM No comments:

Judo HIGHLIGHTS Grand Slam Paris 2017
Posted by Owen_Schilling at 5:47 AM No comments:

Posted by Owen_Schilling at 4:35 AM No comments:


"Rare footage of Liang Ke Quan performing Cheng style Ba Gua Zhang. Although very skilled in both Xing Yi Quan and Ba Gua Zhang, Liang Ke Quan was more well-known for his Xing Yi Quan. This video was filmed at a gathering that I had the amazing pleasure of attending at a wushu school that he founded in his hometown of Zhuo Zhou in Hebei Province.
Liang Ke Quan was part of the inner circle of Cheng style Ba Gua Zhang and various styles of Xing Yi Quan. His first teacher, Zhou Lu Quan. was a student of Liu Feng Chun. Liu learned directly from Ba Gua's originator, Dong Hai Chuan, as well as Dong's student, Cheng Ting Hua, the founder of Cheng style Ba Gua Zhang. Liang went on to study with many other distinguished masters including extensive study with Cheng Ting Hua's youngest son, Cheng You Xin, Lo Xin Wu and Zhang Yin Wu, a student of Li Cun Yi."
Posted by Owen_Schilling at 9:17 AM No comments:

The oldest form of Kung Fu, Shuai Chiao can be traced back to Huan Ti, the “Yellow Emperor”(2700 BC). Shuai Chiao means “competing to throw”, so Shuai Chiao is often called Chinese Wrestling, which could be misleading, since leg work(low kicking, leg tangling, and tripping), arm locks, and a variety of hand strikes are all part of this devastaing system. 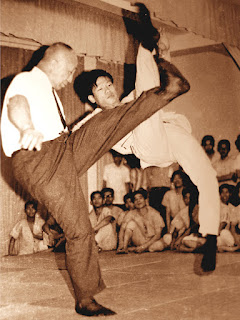 The father of modern day Shuai Chiao was Grandmaster Ch’ang Tung Sheng who died in 1986. Grandmaster Ch’ang Tung Sheng was born in 1908, the year of the Monkey, in Hopei Province in the northeastern section of China -a province long known for the great martial artists produced there. Of all the Masters coming from this region over the past 2,000 years, one of the most pre-eminent is the legendary Grandmaster Ch’ang Tung Sheng, perhaps the greatest fighter in the last 300 years irrespective of style and certainly the most tested and proven one in this century. Grandmaster Ch’ang started serious training in Kung-Fu in 1915 when he was seven years old. He learned the basics from his father & grandfather, but later his teacher was the famous Master Chang Feng-Yen who was well known as the foremost expert in Pao-Ting Shuai Chiao, the fastest and most powerful of the 3 main branches of this ancient art. Chang Feng-Yen was the top disciple of Ping Jing-Yee, who like Grandmaster Ch’ang, was a legend in his own time. General Ma, the first of the great Masters to compile ancient Shuai Chiao techniques for publication, was another prestigious student of Ping Jing-Yee.

Grandmaster Ch’ang has often stated that Master Chang Feng-Yen was the best teacher in that time regardless of style, and, as a result, many of the most promising young students wished to study with him. Of many who came before Master Feng-Yen to exhibit their basic skills, very few were chosen. Grandmaster Ch’ang was not only one of those few, but by the time he was eventeen he was already declared a Master himself, had attained proficiency unmatched by any of his peers, was the favorite pupil of Master Feng-Yen, and had married his Master’s second daughter. When Grandmaster Ch’ang was about 20 years old, he left Hopei Province and went to Nanking to study at the Central Kuo Shu School, the best in all China, in order to learn all the major styles of Kung-Fu. Since the best instructors and students from every major style were represented there,admission was an honor and exposed the practitioner to the widest possible cross-section of Chinese Martial Arts knowledge that could be found anywhere- in a phrase, if it wasn’t practiced there, it probably wasn’t worth much. Once again, Grandmaster Ch’ang’s capabilities were such that after five years of training with the best students in all of China, he emerged at the head of the program and became the teacher of the Shuai-Chiao department, having also mastered the styles of Shing Yi, Lo Han, Tai Chi, Pa Kua, and most elements of Shaolin in addition to his own!

At one point he went to challenge the Mongolian champion at their annual meet in Chang-Chia-Kuo, and in so doing had to fight the well known Kuhli, a giant of a man standing well over six feet tall and weighing almost 400 lbs.! Grandmaster Ch’ang agreed to use only wrestling techniques, and, despite the difference in size, repeatedly countered dozens of attacks by the Mongolian champion while throwing him down again and again with a variety of beautifully executed moves.

In 1933, at the age of 25, Grandmaster Ch’ang entered the Fifth National Kuo Shu Elimination Tournament in Nanking. This “no holds barred” competition involved over 1,000 participants and included Masters in all major styles from all over China battling each other for supremecy in all-out combat. Grandmaster Ch’ang won all of his matches, including one over his arch rival Liu Chiou-Sheng, and emerged the heavyweight grandchampion. Significantly, this was the last great tournament of its kind where Masters who were trained in the old ways fought in an “anything goes” manner to determine the very best among them. This national meet was considered to be the severest test of the ability, strength, and skills of any fighter and the winner was fully acknowledged to be the undisputed Champion of all China. Such open, free style, “no holds barred” tournaments on that scale were never held again, leaving Grandmaster Ch’ang the last truly tested fighter open to challenge by anyone regardless of style or system!

Both before and after his brilliant victory in the National tournament, Grandmaster Ch’ang traveled frequently with the intent of seeking out different teachers all over mainland China that were known to him to be famous for certain techniques or movements. It has been said that he studied with most of the best living Masters, humbly playing the role of “student” even though he could defeat them. He continued this quest until he had learned the specialties of some 70 different teachers and was satisfied that the techniques he knew were the best in existence.

During World War II, Grandmaster Ch’ang trained elite units of the military where he eventually rose to the rank of Lt. General. His exploits during this time are a story in themselves and would take a book to recount. Just one aspect of his many experiences involved challenging all of the top Judo experts at the Kuang-Si Province prison camp. Over a thousand prisoners were interned there and amused themselves by practicing Judo all day long. After challenging and beating their Chinese guards, they were confronted by Grandmaster Ch’ang who had heard of their prowess while teaching in Kue-Lin, the capital of Kuang-Si Province. Grandmaster Ch’ang fought every one in turn, including three high ranking champions, Hakayama Taido, Hisa Kuma, and Michi Masao, and defeated each of them handily.

In 1948, the National Athletic Meet was held in Shanghai. Unlike the tournaments before the war when hundreds of great Masters were still living(many died in the war), the meets following the conflict were not open, free-style, “anything goes” in organization. In conjunction with this major change, Shuai Chiao was now an independent contest and using other styles of Kung-Fu as the Grandmaster had done formerly were not allowed. Even so, the scope of the contest was large, with participants coming from 32 provinces, 12 special municipal cities, nine overseas Chinese teams, and 58 Military police units! Grandmaster Ch’ang, now 40 years old, represented the Army and easily won the overall championship proving he was still number one even after 15 years had passed!

Having won two national tournaments and proven himself countless times in hundreds of matches, both friendly and otherwise, Grandmaster Ch’ang went on to teach at the Central Police Academy in Taipai for nearly 30 years. During that time he was also Chief Official for all of the national tournaments on Taiwan and Shuai Chiao advisor for the military, the police, and the educational system. Though many Kung-Fu styles are taught in Taiwan, none have the prestige of Shuai Chiao, where the Taiwan Shuai Chiao Association boasts over 38,000 members– making it one of the largest Kung-Fu organizations in the world!

In April, 1975, Grandmaster Ch’ang, then 68 years old was invited to Morocco to give an exhibition of the Chinese arts to the King(Grandmaster Ch’ang’s faith was Islamic). During his visit, a 4th degree Tae Kwon Do instructor in service to the King as head of his personal bodyguards challenged Ch’ang and was accepted. The “match” lasted only seconds as Grandmaster Ch’ang deftly dodged the attack of the Korean and knocked him unconscious with a slap of the hand! Obviously, the years had not diminished the physical power and skills acquired by being trained by Masters from the previous century, the likes of which now exist only in a small handful of very old men.

In February 1982, the Grandmaster organized the International Shuai Chiao Association and spent much of the time since promotiing his art by traveling throughout the world giving demonstrations, workshops, and seminars. In June 1986, at the age of 78, the martial arts world was saddened by his untimely death.

The extent to which Grandmaster Ch’ang was respected, revered, and feared by the Chinese martial arts community is incalculable. He was regarded as a literal “national treasure” by Taiwan and was the only Master to be granted the red, white, and blue belt, the national colors of Taiwan, which was buried with him and will never be awarded again. Since the knowledge and the caliber of men needed to train someone as Grandmaster Ch’ang was trained no longer even exist, the 10th degree in Shuai Chiao was retired upon his death never to be awarded again. Some say that as much as 60% of all Kung-Fu knowledge that existed in the earlier years of this century went to the grave with him!

In perhaps all of Chinese Martial Arts history, no one ever went totally undefeated for well over half a century- certainly not if they accepted any and all challenges as Grandmaster Ch’ang did! Indeed, he was not only just one of a kind, but, unfortunately for all of us, Grandmaster Ch’ang was one the likes of which will never be seen again. Amid all of the competing and conflicting claims made by latter-day teachers as to whose style or system is superior, no one except the disciples of Grandmaster Ch’ang can state that their teacher defeated the teachers from all other styles at a time in history when the deciding factor in victory was who walked away!
Master Mollica on being thrown by
Grandmaster Ch’ang Tung Sheng:

“Attacking Ch’ang Tung Sheng was like sticking your hand in a blender…
He hit you, locked you, and threw you to the ground with one whirling motion!”