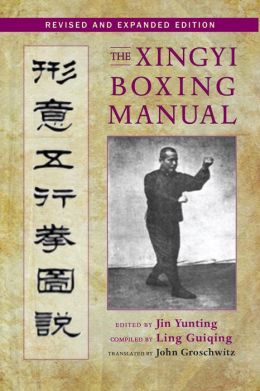 This revised and expanded edition of The Xingyi boxing Manual is worth the read although there is nothing groundbreaking or earth shattering about its content to the serious Xingyi practitioner in 2015. This edition has some differences from the original 2004 release. As I dug into my copy of the 2004 edition I realized the extent and significance of the recently revised and expanded release. As translator John Groschwitz explains in the introduction to the recent edition:


“Only several years later did I discover that this short book (the 2004 edition of the Xingyi Boxing Manual), published in 1931, was itself an excerpted version of A Pictorial Explanation of Xingyi Five Element Boxing, published one year earlier in 1930. This earlier, longer version contained almost all of the material in the 1931 edition, but also offer more detailed discussions of theory, and step-by-step instructions…”.
The Xingyi Boxing Manual is a classic Chinese Martial Arts manual produced in the 1930’s by
Jin Yunting; a long time practitioner of Xingyi who learned from some of the greatest Xingyi masters who ever lived. The book is interesting because of its limited scope. It focuses specifically on teaching the Five Fists of Xingyi Quan and the “classics” (the theory that governs Xingyi practice and usage). The Summary of the Five Principles section is an edited summarization of the material covered in the original 2004 edition. The summary has hand drawn pictures of Jin in each posture of the Five Fists as well as an accompanying classic “song” or poem covering the basic requirements of each fist.

The “General Theory” section has a number of discussions of Xingyi theory including:
·         Xingyi Origins
·         Qi
·         Methods
·         Six Harmonies
·         Eight Postures
The following section was not included in the original 2004 book and is a welcome edition. The “Essential Teachings on Yue Wuming’s Xingyi Quan” is one of the more interesting parts of the book. It is a long section including Yue’s nine teachings and an extra section on “methods for crossing hands”. All of the commentary in this section is focused on Qi;  the meaning of Qi, the development of Qi, Qi and its relationship to Xingyi Quan, the mind, the meridians and body methods. Some of these sections contain gems of information and wisdom.
The explanation of the Five Fists is really the blow by blow of the five forms, how to perform the forms with their requirements using drawings and photos. I am not a fan of reproducing forms via pictures in books. But this is a classic manual produced in the 1930’s for mass consumption. I also believe that the intention was to help the Chinese people by providing a way to exercise, not teaching Xingyi Quan for fighting. This book is a classic and should be in the library of any serious Xingyi Quan practitioner or Internal Martial Arts player.


Owen Schilling is a 20 year practitioner and teacher of Xingyi Quan, Bagua Zhang and Tai Chi Quan, a lineage holder in the Yi Zong School and the lead instructor at Boulder Internal Arts in Boulder, CO.
Posted by Owen_Schilling at 6:30 AM