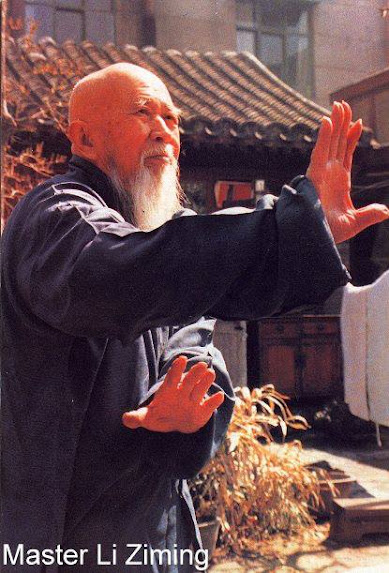 "Li Zimin (June 25, 1902 – January 23, 1993) was an expert in the field of martial arts and belonged to the third generation of Bagua Zhang masters in the line of the second-generation Master Lian Zhenpu, the founder of the Bagua Zhang Lian style. Li Jimin was born in Lijia Village, Ji County, Hebei Province on June 25, 1902 and died on January 23, 1993, at the age of 91. He was brought up very well, studied literature and martial arts, and was very talented in calligraphy and painting. In 1921, he became a pupil of his father's friend, second-generation bagua zhang master Lian Zhenpu. He began to intensively study the art of Bagua Zhang, which was passed on by Lian Zhenpu using oral tradition. Li practiced every day until he reached a very deep understanding of the battle secrets of Bagua Zhang. After extensive training under Lian Zhenpu, Li entered the Hebei Provincial Academy of Martial Arts and continued his training in martial arts under the guidance of famous masters Zhang Zhangquya, Shan Yunxiang and Zhu Qingyuan. He later returned to Beijing, where he often exchanged experiences and sparred with his martial arts brothers, famous specialist Guo Gumin, Li Shaoan and Zhen Xinsang, as well as many other famous martial masters. Li has a very high level of technical mastery and understanding of all aspects of Bagua Zhang, including forms, weapons, theory and methods of combat. He was especially good in the art of combat, his skills in hand-to-hand combat have grown significantly over the years. Li dedicated his life to the preservation of Bagua Zhang forms, the study of Bagua Zhan theory, and popularization of this art. In 1979 , to preserve the tomb of Dun Haichuan, Li suggested moving it from the old site to the Wanyan Public Cemetery; On August 2 or 3, 1980, a group of over 100 Beijing followers of Bagua Zhang under his leadership moved the remains of Dun and corresponding stone plaques to a new location at the Wanyan public cemetery. Lee Jimin was conscientious and thorough in everything to do with Bagua Zhang. He did not fall for flattery, he possessed high moral qualities and true virtue. He was well known as a man of generous, kind, humble, friendly, generous and goodwill to others. He was very patient when teaching his students and never withhold anything from them. However, here it is necessary to understand what the concept of "student" in the world of martial arts is "ulin". Lee Jimin conducted extensive research on other Bagua Zhang destinations and took the best out of each. He inherited the entire Bagua Zhang system and contributed to the creation of many famous martial arts fans and masters. In 1981, he helped establish the first mono-style research association in China, the "Baguizhang Research Association" in Beijing, and was elected its first president, holding that position until his death in 1993. He also founded the Bagua Zhang Training Center. He has received many honorary awards from national and international martial arts associations. After his death, he became the second man after Lian Zhenpu, who was buried next to Dun Haichuan in the Wanyan Public Cemetery. Lee Jimin's most famous students are Ma Chuangsui ( 赵 () (second president of the Beijing Bahuachan Association), Wang Shitun ( ю), Zhang Huasen ( ),), Zhao Dayuan ( бо), Di Goyun ( зы) (former president of the Beijing Xinjuan Research Association), Sui Yunjiang ( (), Li Gunchen ( 功), Wang Tun ( ун) (also the former president of the Beijing Xinyi Tuan Research Association), Lin Chengyun, Zhang Tianlian ( а) (who has released several VCDs and DVDs and also authored a number of books), Sun Hyunyan and Ma Lin. Also, Lee Jimin studied from other famous bagua zhang masters, such as Zhang Zhangui, Shan Yunxiang. Lee Jimin always practiced a moral understanding, was well known for being generous, kind, humble, open and helpful to others. The master was very patient when teaching his students. Master Lee Ji-min is for all followers of the teaching of Ladoni the Eight Trigrams - a living example and source of mastery that does not fade away with age, but only inspires further practice and study of the art of Bagua Zhang. Translation - Vladimir Amida (c). P.S.: BAGUA ZHANG ONLINE TRAINING: https://www.facebook.com/groups/baguamen/permalink/4501457873209922 Help and thank the group can be made here: https://www.facebook.com/groups/baguamen/posts/3828639937158389 Video of "Lee Jimin Dashi performing Laoba Zhang, or "Eight Old Palms" at his venerable age": https://youtu.be/3yg0DgyKe8s" found here

Posted by Owen_Schilling at 6:19 AM