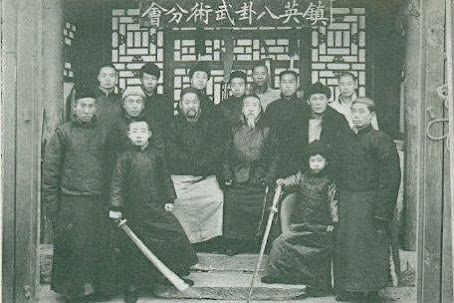 "A very rare photo taken in 1902. Li Yaochen of the Cannon Boxing of Three Emperors stands 2nd from the left in the middle row; in the same row, 4th from the left, the old man with white beard, is Guo Yunshen, master of Xingyiquan famous for his half-step Crushing Fist. To his left (5th from the left), wearing a hat, is Guan Nianci. Guan, originally from Suzhou, was a famous master of seal carving - emperor Guangxu used seals carved by Guan. For those interested in chinese zither - Guan Nianci was also the father of Guan Pinghu, master of guqin, whose recording of "High Mountains and Flowing Waters" was taken by Voyager into deep space in 1977.

This photo is one of the two existing of Guo Yunshen (another, more famous one, was taken during his visit to Taigu in Shanxi). In the rear row standing from the left are Wang Lanting, Wang Haoting, Wang Xianting - three of the "Four Pavillions" (the missing one was Sun Liting) - "Si Ting" - Ting is the character in each of their names and means "pavillion". The first one, Wang Lanting, was not the same person as Yang Luchan's first disciple, who carried the same name." – Jarek Szymanski

Posted by Owen_Schilling at 4:49 AM