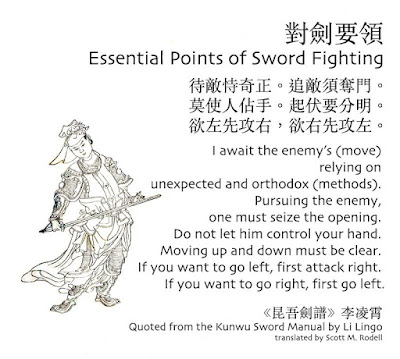 I await the enemy’s (move) relying on unexpected and orthodox (methods). Pursuing the enemy, one must seize the opening. Do not let him control your hand. Moving up and down must be clear. If you want to go left, first attack right. If you want to go right, first go left.

Commentary -
The first line contains the binomial qí zhèng and alludes a line from Chapter Five in Sunzi’s “Art of War.” Samuel Griffith translated that line as, “That the army is certain to sustain the enemy’s attack without suffering defeat is due to operations of the extraordinary and the normal forces” where qí zhèng are translated as the extraordinary and the normal forces. (奇正相生,如环之无端,孰能穷之. Qí zhèng xiāngshēng, rú huán zhī wúduān, shú néng qióng zhī.)

In military terms, qí zhèng has also been translated as, the “unorthodox and orthodox” and as “maneuvers direct and indirect.” In terms of battlefield tactics, military commentators describe qí as encircling or surprising the enemy with a flanking attack. While zhèng is a frontal assault or facing the enemy head on. (More discussion and detail maybe found at: https://suntzusaid.com/book/5). Aside from the physical shape qí zhèng represent in actual troop movement, in principle qí zhèng means that one should not be dogmatic, that while maintaining a solid frontal formation, one is watching for side doors through which to enter and even creating these possibilities by how one is facing the enemy.

This is sound advice for the jianke, who must maintain a position that does not unintentionally offer any windows or doors for the duifang to sneak in, but also not ridged or inflexible, but rather ready to follow into any opening that presents itself. Thus the “orthodox” ready position is used to create the “unorthodox” or unexpected entrance from the side. In this manner, there is a yin-yang relationship between qí and zhèng where one transforms into the other as the flow of the action requires.

Essential Points of Sword Fighting - Translation and Commentary by — Scott M. Rodell
Posted by Owen_Schilling at 5:04 AM