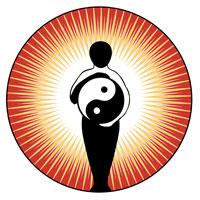 Taoist (Daoist) Creation From Zero to Five
(In the beginning) there was Profound Nothingness from which appeared One Primordial Energy, which expanded into the Two polarities of Yin/Yang. Then there was Three: the Heavens above, Man in between, Earth below. Three became Five: the myriad things of existence appearing in inter-related patterns of Five, called Wu Xing (pronounced woo sheen). In English this means something like The Five Phases of Energetic Forces or more commonly but not more accurately, The Five Elements.
But this is about archetypal universal energy, not physical substances. The etymology of wu-xing helps to explain this: Wu means five. Xing literally means going from one place to another place as in moving from a here to a there. In other words, a state of (cyclic) transition.
The Five Elemental Energies in Nature and in Man
Wood-Fire-Earth-Metal-Water were the names chosen to describe the five types of Elemental Energies. Trees come to life in the spring. Fire is hot like the summer. Earth is most fertile in late summer/early autumn. In winter there is much rain and snow, and water freezes.
Basic correspondences were found between these elemental energies and the five organ systems of the human body. Liver and Wood are both flexible and smooth. The Heart like a Fire warms the entire body. Earth grows food which the Spleen-stomach digests. Metal is cool and hard, and is used to make containers. The Lungs also are cool, encased in a hard rib cage, and contain the breath (sick lungs also resemble badly rusted iron.)
This article is about the five sounds that accompany each of the organs, and a sixth for harmonizing their functions. All Six Sounds may be used to bring about Well-Being.
The Six Sounds
How to Make Them The Preliminary Exercises
Begin by practicing the following sounds. Make them with a steady tone in the middle-high range of your voice.
1. Shooo (with puckered lips as if blowing a kiss) for the Liver.
2. Haaaw (sound it down in the throat, almost as if you were clearing your throat) for the Heart.
3. Whooo (with more exaggerated puckered lips) for Spleen-Stomach.
4. Tzzz (like the first part of Tzar ) for the Lungs. Extend your lower jaw, keep the tongue flat on the bottom of the mouth, then with breath and mind direct the buzzing sound to sink down deep into the chest.
5. Ch way (The explosive sneeze-like beginning of the sound literally squeezes lower internal back muscles) for the Kidneys.
6. SHeee Make the sound out loud for now, but when actually doing the Six Healing Sounds this sound is to be done silently. This harmonizes the Triple Burner i.e., the functioning aspects of the five organ systems in the torso. (The H is capitalized because it should be louder than the opening S. )
These sounds should actually physically vibrate the targeted organ like an inner-massage. If there is difficulty in doing and experiencing this, then try this: for the Liver lie down on your right side and say shooo. For the Spleen lie on your left side and say the whooo. For the Heart press your palms down between your breasts and make the haaaw sound. For the Lungs press the hands against the upper chest and make the sound of tzzz. For the Kidneys place the hands on the sides of the lower back between the rib cage and the hips and say ch way. For the silent SHeee sound hold the breath shake, vibrate and wiggle the whole torso.
You can do the sounds in any order, or choose one or more however you want to. If you have a teacher of the sounds it is proper that you follow their instructions. However, I was taught that if the standard order (as above) is followed then it is imperative that you do each of the five sounds at least five times, and that you must make the sixth one silently.

Major historical sources for the Six Healing Sounds are Tao Hongjing (456-536), Zhiyi (538-597), and Sun Simiao (581-682). Also in modern times, Ma Litang (1930-1988).
This article is based on the sound-to-organ assignments, and pronunciations given in the book and DVD, Liu Zi Jue: Chinese Health Qigong (2007). Since the Chinese government oversaw its publication, it may be considered as being the modern standard. This order is also used in such important texts as Qigong Empowerment by Master Shou-Yu Liang & Wen-Ching Wu, and The Complete Book of Chinese Health & Healing, by Daniel Reid, as well as in many other sources. However, If the reader have been instructed in using a different order then it is proper to follow the teacher and do that order.
The extensive historical literature about the Six Sounds generally offer the same Chinese characters in the same standard order. Here they are in a sort of pinyin without accent marks, along with possible literal meanings: Xu ( hush ). A ( oh! ). Hu ( breathe out ). Xi ( ha-ha ) [laughter]. Chui ( blow ). Xi ( giggle ). However the Six Healing Sounds are said without any tonal inflections, so any specific meaning is at best only intimated, only hinted at. The important thing here is the sound, not the meaning.

Found:HERE
Posted by Owen_Schilling at 5:57 AM