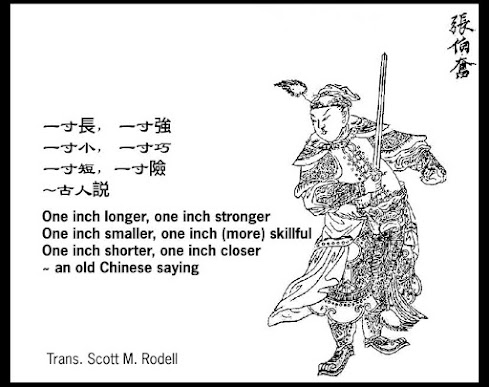 一寸小， 一寸巧
一寸短，一寸險
~古人說
Yīcùn cháng, yīcùn qiáng
yīcùn xiǎo, yīcùn qiǎo
yīcùn duǎn, yīcùn xiǎn
~Gǔrén shuō
One inch longer, one inch stronger
One inch smaller, one inch (more) skillful
One inch shorter, one inch closer
~ an old Chinese saying
"This is an old martial saying that seems to originate at least in part with General Qi Jiguang who wrote, “Short weapons cannot intercept long weapons, one inch longer is one inch stronger (Duǎn bù jiē zhǎng, yīcùn cháng yīcùn qiáng, 短不接長，一寸長一寸強).” In general, the phrase addresses the difference between long weapons, such as spears, and shorter weapons, including swords.
It terms of sword work itself, this may be interpreted in another manner as~
If your sword cuts are an inch longer, they will have more power. However, if they are an inch smaller, that is more skillful. Then the distance to the duifang is an inch shorter, and you are an inch close to land a blow.

This describes the evolution every diligent swordsman moves thorough. At first, one tends to rely on power. Further training brings refinement leading to one’s movements becoming smaller, tighter, and thus quicker. Deflections are then only as big as needed and the sword isn’t swung at the duifang’s body in general, but at a small, exact target. This compacting of one’s technique changes the timing of actions so that your sword ends up moving closer to the target even as the duifang is attacking. Thus the distance to your target is shorter though the starting distance has not changed.
Note that the last word in this saying, xiǎn, is typically translated as danger in common vernacular Chinese. It can however also mean to be near as in anear miss or a close call.. The overall structure of the saying is one where a specific condition leads to a improved result. Following that structure, the distance being an inch shorter, places the swordsman in a better tactical position, one inch closer to landing his or her blow. Certainly, that is also a more dangerous position (for both swordsmen). However, if one has deflected properly, leading the duifang’s weapon into a void while maintain tip control, so that one’s sword is aligned with its target, then in this dangerous position, there is a strategic opportunity."